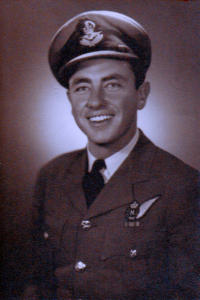 November 11th is fast approaching. For some, it’s just a day off with scant regard for what it really means. For the “boomer generation” and those who have followed, the tragedy of war, although never forgotten, seemed so long ago and somehow both far away and detached from the very privileged and civilized Canada of today. The meaning of Remembrance Day is well understood by those who served, whether in World War II, the Korean conflict, in peacetime or peacekeeping. And the horror of war is certainly not forgotten by those who lost a family member, as our family did.

I never knew my Uncle Jack. John Nelson Friesen, youngest in our Mom’s family, died in action in Burma when his aircraft crashed shortly after takeoff on a mission behind enemy lines. The date was April 1st, 1945, and his last letter home was to our mom congratulating her on my birth. He was much loved by all who knew him and I’d never heard Dad speak of anyone other than Mom with such affection. Jack loved to sing, to hunt and fish and had promised Dad that when he came home they would buy an orchard together. 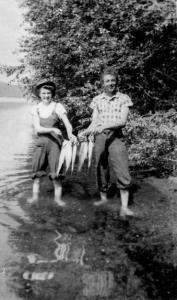 Our family, like our McCarthy cousins, has always kept the memory of Uncle Jack very much alive.  It has made that war more personal for us, even though so much time has passed. The picture that appears here puts a very human face to our loss and the tragedy of war. No uniforms, no medals, just a smiling young man with his whole life ahead of him. It was taken at the south end of Wood Lake in the 1930’s and the young lady is our Mom.

It is sad beyond belief that once again young Canadians are dying in a far off conflict, serving their country and the world. History repeats itself as younger generations will grow up with their own stories of family loss. Whatever our position on the war they are fighting, we owe the members of our armed forces a tremendous debt of gratitude.

The Royal Canadian Legion’s Remembrance Day services at GESS each year provides our community the opportunity to remember and honour all of those who have served. They also present a Veteran of the Year award. [Some] years ago they honoured Ed Culley of Oyama. I had known and respected Ed for many years, without being aware of his war service. The ordeal he suffered as a long term prisoner of war in Singapore so many years ago was beyond comprehension. Since making Lake Country his home he has been a tireless worker for his community and for his fellow man.