This is the first of a series of blogs relating to on my family’s settlement in Oyama.

On July 10, 1919 the Vernon News noted the following event. “Mr. H. B. Thomson of Indian Head, Saskatchewan, with his family, arrived at Oyama last Friday, having motored the entire way, coming through the states. Mr. Thomson has bought the Nelson Ranch and will make his home there. We are very pleased to extend a welcome to our new neighbours and also his six children, who will no doubt swell the ranks of our school. This is undoubtedly an ideal place for children, the climate being as near perfect as can be.” 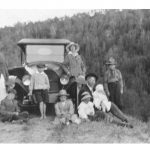 The background to this story is that Nina Thomson was actually from the Okanagan, having arrived in Vernon as a teenager thirty years earlier on the first work train to arrive in the city. The family was joining Nina’s father, S. C Smith, who had earlier hauled his sawmill over the Vernon to Kamloops wagon road to set up business in the prospective town. Nina completed her schooling in Vernon and upon graduation she visited cousins in Cartwright, Manitoba and Detroit, Michigan. She renewed her acquaintance with Harry, married him, and the couple returned to the Okanagan where Harry worked for his father-in-law. S. C. Smith operated sawmills in Vernon, Enderby and Naramata and owned lumberyards in Vernon and Penticton. In fact, Front Street in Penticton was at the time called Smith Street. As I child, I asked my grandmother why uncle Frank was born in Penticton and she replied, “Because I was there.” This response closed off that line of enquiry. Apparently, Harry did not get along with Oliver, one of the Smith boys, and this likely led to the family moving back to the prairies, where he worked as a salesman and farm implement dealer in places like Shilo, Brandon and Indian Head.  Nina bore six children before the end of World War I.  She contacted the Spanish Flu in 1918 and came very close to death, prompting the family to return to the Okanagan where the climate was dry.

The Nelson Ranch was an established orchard on Middle Bench Road and Harry operated that orchard as well as that of an absentee neighbour. After a few years, he left his family on the farm and returned to the prairies to work as a travelling salesman with Precision Machine. The Thomson boys grew up working on the family orchard and on those of their neighbours. In 1928, when the children were teenagers, Harry sold the orchard and, while retaining his job in Calgary, built the family home on Kalamalka Lake. He re-joined his family in Oyama during WWII, at a time when the children were working or serving overseas. 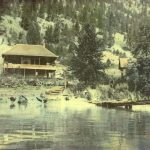 The house remained in the family until Nina died in 1958, after which Harry sold and moved to Calgary. This is the lake house that attracted the Thomson grandchildren during the long days of summer in the 1950s. A diving board was situated on at the end of the dock so that diving and swimming were constant activities. Granny Thomson owned a wooden rowboat that her grandchildren rowed, sailed, submerged (it always floated to the surface), and turned upside down. Grandpa Thomson had built a long, low, well-lit shed at the lakeshore featuring a work bench, some hand tools, and odds and ends of construction materials, together which made it a cool (literally) place to make stuff. Grandpa Thomson also had a sixteen-foot indoor motor, clinker-built boat that transported the Thomson family to picnics and corn roasts at various places along the lake. This was such an ideal childhood.