“As James had predicted, the night clerk was off duty, but the departure of the two men did not go unnoticed. Alf Watson, the ship’s purser, saw them leave and wondered who they were.

When the Okanagan was a mile or so from Peachland, Watson was still trying to figure out who these two men were because he hadn’t booked any passengers for Peachland. He was so interested that he went back to his cabin to check the passenger list. There was no one booked for Peachland. A persistent person, Watson hunted steward Spencer Stovell. He was conversing with one of the passengers who was voicing suspicions about cabin 34. “I think whoever is in there is sick,” she said. “I’ve heard the most unusual noises.”

Watson and Stovell immediately reported to the mate, Alec McDonald. The three of them went to the cabin and knocked. Getting no answer, they entered by the deck door.

McDonald, in the lead, recoiled in horror as he saw the still figure of Aston in a pool of blood. Quickly the injured man was lifted into the lower bunk. As he was lifted, he opened his eyes and smiled.

When the steamer reached Gallatly about 8 a.m., Constable Tooth at Kelowna was advised of the shooting and lake side telephones quickly relayed the news of the shooting. Big Geoff Aston was known and liked throughout the district, and many residents expressed in unmistakable terms what should be the fate of the murderer.

When the sternwheeler docked at Kelowna, Dr. Austin Huycke accompanied the injured policeman to hospital. There it was found that the bullet was so deeply embedded in his brain that an operation was impossible. “Only a miracle can save him,” declared the doctor.

Chief Constable P.G. Routh of B.C. Police Headquarters at Vernon took charge of the manhunt. Soon squads of Special Constables were posted on every road and trail, while small boats patrolled the lake. In addition, Indians from the Westbank Reserve, noted for their tracking skill, joined the intensive search. Since the snow-covered hills offered scant shelter to the hunted men, two ranchers from Wilson’s Landing, P.H.L. Seeley and R.D. Ramsay, felt that they would stay close to the lake side and the wagon road.

They had been told to watch for strangers, the reason they carried Winchesters as they walked along the road on the morning of the second day of the search. Rounding a bend, they stopped suddenly. Two men were approaching. Quietly the ranchers stepped behind a big rock, each working the lever of his Winchester.

Nearer and nearer trudged the strangers, the ranchers recognizing them as the fugitives. As they passed the rock, Seeley stepped out. “Throw up your hands,” he commanded.

James whirled around, in his hand Aston’s .38 revolver.

“Drop it!” snapped Seeley, sighting along the barrel.

The revolver dropped harmlessly to the road. Both men were searched. Then, hands behind their necks, they were soon at the steamer landing. Once again they stepped aboard the Okanagan, again as prisoners. This time there was no chance for escape —  an enthusiastic deck crew lashed the pair to a mast.

The steamer reached Kelowna on Wednesday, March 20. Word of the arrest had spread and the dock was jammed with sightseers. Through the throng the prisoners were hustled to the police station.  …

While the killer never overlooked anything that might help him escape, neither did the police.. He went to Vernon leg-ironed and handcuffed between two prisoners.

Before Chief Justice Gordon Hunter, James heard a jury say “Guilty.” He was sentenced to hang at Kamloops on August 9, 1912.”1 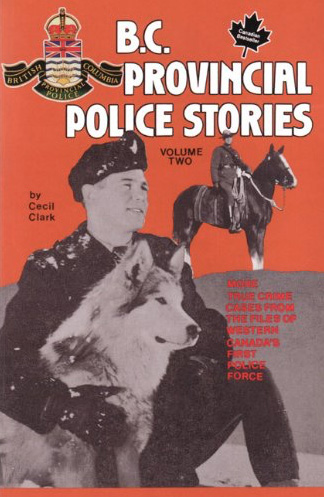 This article was re-printed with the permission of Heritage House Publishing Company Ltd. The book is available through Amazon: