In the days before good road and rail communication ser 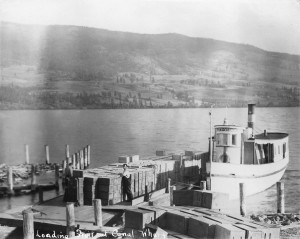 viced Oyama orchardists, the most efficient way to move fruit to market was via steamer to the north end of Kalamalka Lake where it was transferred to the Canadian Pacific Railway (CPR) station at Vernon. This photograph, part of the George Goulding collection held by the Lake Country Museum, shows one link in that network.

The navigation canal connecting the two parts of Long Lake (Kalamalka and Wood lakes) was opened on September 3, 1908 and the City of Vernon that had been operating on Kalamalka Lake since April 1908 was the first boat through the waterway. Owned by C. C. Pilkey, the City of Vernon sometimes pushed a barge and at other times took passengers and goods aboard the boat itself. The City of Vernon was joined on Long Lake by the Johnson and Carswell steamer, Maud Allen, the next year and by Princess Pat in 1916.

Source: Much of this information was taken from the Oyama Timeline. 1871 to 1995 by Ken Ellison, available on this website. Also available on the website is a small sampling of photographs from the Goulding (George & Maisie) Album. Click on photograph to enlarge it.