The first Women’s Institute was founded in 1897 in Stoney Creek, Ontario and by 1913 institutes were established in all the provinces with the motto “For Home and Country.” Often responsible for much of their farm’s economic success, the Institute allowed an organised outlet for their considerable talents and recognition of their abilities. Minutes of the Kalamalka Women’s Institute show involvement and interest in larger affairs as well as an earnest interest in local issues and events.

The inaugural meeting of the Kalamalka Women’s Institute took place February 1914 with Mrs. Annie Trask in the Chair. There was discussion about the bringing and sharing of recipes, including pickling and canning, and arrangements for a flower show. Soon however, the onset of the 1st World War realigned priorities. In the April 1914 meeting, “owing to the busy season among Farmer’s Wives, it was unanimously decided that the Institute could not avail itself of the Instruction in Dressmaking by the Anglo-Parisian system under the direction of Madam Grohe.” By June a Patriotic Fund was started in aid “of distress caused by the European war,” and at a later meeting it was determined that the funds raised “be devoted to the relief of necessities for women and others who have been thrown out of employment by the European war and have no claim upon the government for maintenance.” However, a sense of balance was retained when later in the meeting, a demonstration of cake icing by Miss Hicks and Mrs. Griffiths was featured. 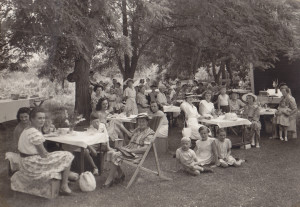 The May 26 1915 meeting was opened to non-members to attend to discuss the question of Prohibition. The resolution was “that the time has come for Prohibition to be adopted in this Province” and was followed by proposals for the better regulation of the drink traffic. The subsequent vote was split, 16 in favour, 16 opposed. A subsequent motion however, passed unanimously: “That during the duration of the Military Camp in Vernon the Military authorities be requested to declare all bars out of bounds for soldiers in uniform.” 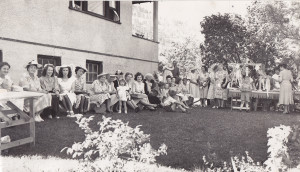 The 1923 minutes record that “Mrs. (Dorothea) Allison spoke of the vulgar dancing,1 which has been commented on by several people, in our Hall, suggesting that the Institute take steps to suppress the same, and as many of the dances are organized by the K.W.I. she considered it would be advisable to appoint a good M.C. who would not allow such dancing (in our Hall). A good deal of discussion followed ‘til it was arranged that as there was no dance planned for the near future the matter would be brought up for decision later.”2 However, discretion may have been the better part of valour, as there is no written record of the subject being raised again.

1 The Latin American tango had spread to Europe in the early 20th century and arrived in New York in 1913. By 1914 more authentic tango stylings were developed.

2 All quoted material is taken from Minutes of the Kalamalka Women’s Institute (KWI), 1914, 1915, 1923. These Minutes are available at the Lake Country Museum Archives.

These photographs were found tucked in a book of KWI Minutes from the 1980s. They look to be photos of outdoor socials, one labelled 1947 (?) and the other perhaps from the late 50s. All photographs can be clicked to be enlarged.