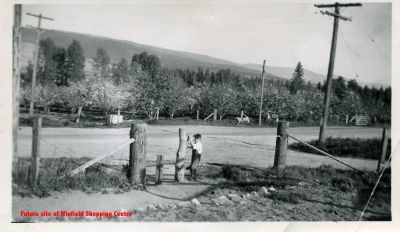 Les Clement began building the first phase of the Winfield Shopping Centre when the late Dr. Marion Dobson asked him if he would build an office for her and a small pharmacy. What would become the shopping centre was then an 8.5 acre apple orchard he had purchased from Bill Lodge and Tom Middleton in 1959.

The shopping centre grew piece by piece. The building to house the doctor’s office and small drugstore was the northernmost part of the shopping centre. Next he added accommodations for a hairdresser and barber and the laundromat. In 1967, a grocery store, operated by the late Wally and Hilda Leismeister, was added. The present IGA was opened in 1977 for Al and Margaret Johnson, and taken over the following year by Doug Gordon.

In 1971 Clement built the Highway Inn restaurant and when the Canadian Imperial Bank of Commerce came into the shopping centre in 1973, he said that “it set off as a business centre, anchored by the post office.”

Construction of the south strip started in 1974 and was officially opened in June 1976.

In September, 1992, Clement sold the Winfield Shopping Centre to a group of investors including Tom Capozzi under a company called SD5 Ventures Ltd. who purchased it for $2.5 million.