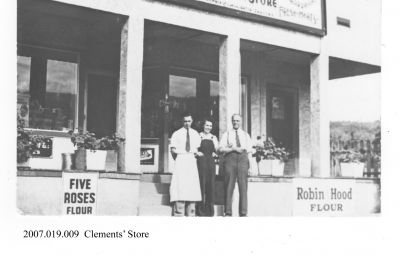 The Winfield General Store was built by Mr. Lawley after his first store at the corner of Berry Road and Highway 97 was burned.

When the store opened, it was considered ultra modern with an indoor bathroom complete with flush toilets, electric lights and other modern conveniences almost unheard of in those days. Gas was sold in front of the store by the old fashioned hand-powered gas pump. In those early years, a good share of the business of the store was conducted by phone with free deliveries to customers being offered twice a week.

Mr. Lawley operated the store until 1931. Winnie and Wilfred May ran it for awhile, then Ted Winchombe operated it. In 1934, it was purchased by Ernest Clement of Ellison. For the next 23 years Ernest, his son Leslie, and daughter Wilma, ran the store.

The Greyhound bus stopped at the store until 1948. There was a small sub-post office in the store in 1948 and by 1951, the Winfield Post Office took over the rural route that had previously been serviced out of Kelowna. An addition to the store was built to accommodate the Post Office. That Post Office served the Winfield district until it was replaced by the present Post Office on Berry Road in 1963.

In 1957, the Clements sold the store to Ernie Oxenham who in turn sold to Howard Ransom a couple of years later. Les Clement continued to run the Post Office and when the new Post Office was built, he was the Postmaster there until he retired in 1974.

The old store was eventually demolished during the widening of Highway 97 in 1987.