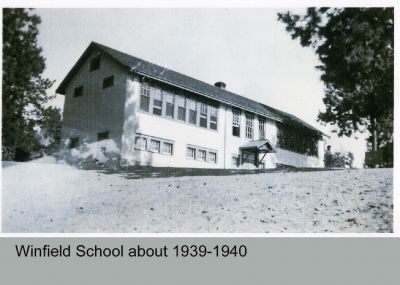 In 1923, a new school was built on the corner of what is now Berry Road and Highway 97, directly west of the original school (See 1905). It went from grade one to grade eight.

The new school consisted of two large rooms with two identical basement rooms directly underneath. The school had its doors at the front of the school facing east (the highway). These doors opened to a large steep stairway that ran between the two rooms of the school. If you went left or right from the foot of the stairs, you would be in one of the basement rooms. If you continued up the stairs you would find a cloakroom at the top. The two original rooms upstairs each had a door that opened into the cloakroom. This area eventually became the school office. During the twenties and thirties, the basement rooms were used as playrooms. The girls played in the north room and the boys in the south room.

This school had many large windows because natural light was the main source of illumination. Coal oil lanterns hanging from the ceiling could be lit when necessary. The school was originally heated with coal. In the thirties, a furnace that burned four foot pieces of wood was installed. Indoor plumbing was not put in until the late thirties. Before that, there were two outhouses located on the west side of the school. These outhouses were unheated and had four stalls each. The boys used one and the girls used the other.

From 1921 to 1924, the Winfield Women’s Institute made significant contributions to the school, including books, sewing materials, an organ, a flagpole and sports equipment. They sponsored music lessons, provided demonstrations of various handicrafts and helped with the Christmas concerts.

In the early thirties, the Board built a teacherage at a cost $2,400 on the school property. There was a narrow dirt road that ran just past the west end of the school building and all the way along to the teacherage. The Elliots moved into the teacherage in about 1932. The School Board charged Mr. Elliot $20 a month in rent. When the school districts were amalgamated in 1945 to form School District No. 23, the rent was raised to $50 a month.

After completing grade eight at Winfield School, the students had to go to Oyama School to get their high school education.