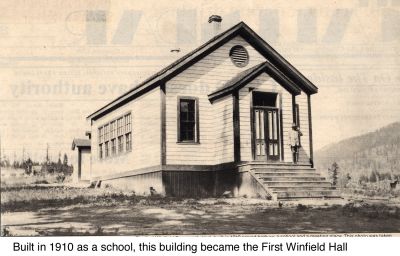 In the Minutes of the Winfield Hall Association’s April 5, 1921 meeting, Chairman E. C. Shanks read a letter from Minister of Education, Mr. J.D. McLean, which stated that the Department was willing to allow the old school building to be used as a public hall and that any necessary alterations should be carried out. It was also to be understood that the control of the building must remain in the authority of the trustees (of the Winfield School District).

A plan of the proposed alterations had been prepared by Mr. N. Prowse, and Mr. Middleton had made a rough estimate of the cost of material and labour. Their report estimated the probable cost as around $1,000.