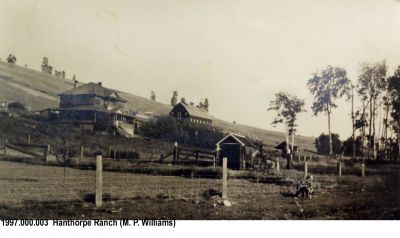 Williams Road, established in 1907, was named after M. P. Williams. The road started at Bond Road and terminated at Okanagan Centre Road East. It was paved in 1974.

Malcolm Parker (M. P.)  Williams arrived in the Okanagan area around 1903, travelling here from Berkshire, England. There was a large amount of land for sale just then and he bought 1750 acres of land at the southeast end of Wood Lake. He set up a sheep ranch on the land and three years later built his house and barns. It was at this time that he brought Mr. and Mrs. W. Petrie to join him to help with the running of his ranch.

Williams was also credited with establishing the first dairy herd in the area. He later changed to rearing beef cattle. M. P. was a prominent member of the Farmers’ Institute and the Anglican Church.

Shortly before his death in 1936 he sold part of his land on the lakeshore to the Vernon Fruit Union which then built the Woodsdale Packing House and Cold Storage Plant there. Williams’ house became a boarding house for the packing house workers and George Reiswig bought his ranch.