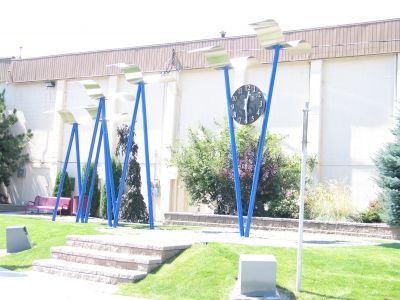 Phases of Time and the Town Clock

On July 1st 2005, a small crowd gathered around while harpist Kate Gibson Oswald played and the Town Clock sculpture was officially unveiled. The hands, now painted a lighter shade, are clearly visible on the face of the clock. Artist Ede Axelson had a few words to say about the meaning of her artwork:

“The original of this sculpture was centered on the concept of time. The mark of time is all around us. Its passage is recorded in the rings of a tree, a fossil in limestone, the mountains and valleys we call home. Nature offers sundials and calendars at every turn.

This sculpture represents the natural indicators of time passing as seen in the seasons; the migration of birds (and the birdlike creations on top of each number demonstrate, time really does fly by), and the reflection of the setting sun on the rippling waves of our lakes. It represents the mountains and valleys, but when read from left to right it also forms the Roman numerals MMV with two of the pillars crossed to form an X. This is to commemorate the 10th year of Lake Country in the year 2005. The clock itself represents the sun and moon, perhaps our most obvious indicators of time passing. On the face are images of some of the industries of this area.

The sculpture is a small mark in time and one that I hope will stand the test of time.”