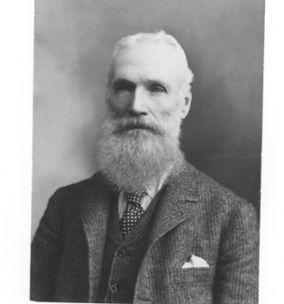 Thomas Wood was born at Buena Vista, Newfoundland, on March 1, 1841. His parents were the Rev. Thomas Martin Wood and Mary Ann Finch, both natives of England.

He left his home in Newfoundland in 1861. He apparently tried prospecting for gold in various places and ended by driving a herd of cattle in partnership with Cornelius O’Keefe from California north to the Shuswap to feed miners in the Big Bend gold fields. He and his partners staked out land between two Indian reserves at the head of Okanagan Lake in order to raise cattle. Wood was one of the first permanent residents in the Okanagan Valley.

In 1871, Wood sold out to Tom Greenhow and established a new ranch at the foot of Long (Kalamalka) Lake on the hills and lower meadowlands to the east and south of Pelmewash Lake which became Wood Lake. He built a cabin, partly of logs and partly of whipsawn lumber and called it Winfield Lodge. There is mention that his house was demolished in 1923 to clear the way for the CNR line.

On July 1, 1889 Wood married Ellen Florence “Nellie” Whelan. She was born at Chipping Barnet, Herts, England, on October 6, 1861, so was twenty years younger than Thomas. Her parents were Peter Whelan (born in Ireland) and Sarah Cordell Burr (born in England). Nellie’s brother, George Whelan, was a pioneer rancher in the Ellison District.

Wood was evidently prudent and inventive. He improved his herd by importing good bulls and at one time he gathered bunch grass, threshed it and took the seed to Brent’s Mill where he had it ground for flour. In 1891, his ranch was at one end of the first private telephone in the valley; it started at the Postill ranch at the north end of Duck Lake, ran for 5 miles and cost $55 per mile to install. Thomas Wood was also a Justice of the Peace from 1875 to 1890.

Wood was 63 years old in 1902 when he decided to retire from ranching. He leased part of his property to Price Ellison and sold some of it to others. He and his family moved to Victoria because of Nellie’s poor health (diabetes) but Nellie died in Victoria in 1905 at the age of forty-two. They had been married just 16 years. Their daughters each married and Wood spent the rest of his life living with one or the other of them. He died in Vancouver on October 27, 1931 at the age of ninety.

Both Nellie and Thomas are buried in a family plot in the Ross Bay cemetery in Victoria. The grave is virtually unmarked, except for the name “Wood” on it. Nellie’s older sister, Mary Ann (Whelan) Patch, who came to the Okanagan in 1891 but died in 1905, is also buried in that grave, along with several other members of the Patch family.