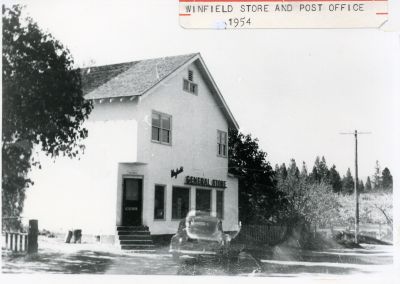 Les Clement’s store on Highway 97 was the shopping hub of Winfield and its population of perhaps five hundred or so. The store was acquired by Les and Iris Clement in 1939 and operated as a general merchandiser by Les until 1957. Groceries, meats and produce as well as every type of staple could be purchased at the store. School supplies, paint, a new pair of gum boots, a fishing license and lures, toys, comic books confections and ice cream treats were just some of the items carried at the store.

The staff at the store were local people and included George King, Dorothy Dehnke, Helen Hein, Pearl Coller and Mona Holitzki as well as others.

Most local residents were allowed to keep an ‘account’ at Winfield General Store. The cash register receipt was added to the family account which was paid, without interest, on payday or whenever.

From the late 1940s, Clement also operated the Post Office and in 1952 he added space to permit full postal service with Art Arnold as the rural carrier. Les continued to be the Postmaster until his retirement in 1974. The store was also the initial location of the Okanagan Regional Library under the watchful eye of Mrs. Kennerly.

The store was located just south of the Winfield Motel and on today’s landscape, it was in the general vicinity of the present Medical Clinic.