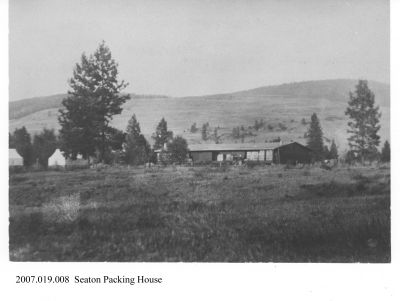 The name Seaton is prominent in Lake Country. We have Seaton Road, Seaton Springs and Jack Seaton Park. Our local high school, George Elliot Secondary, presents the Jack Seaton trophy every year to a student who combines athletic and academic excellence.

Jack Seaton is fondly remembered as one of Winfield’s most enterprising and respected businessmen. In 1903, J. E. (John Edwin) Seaton died leaving his son, Jack, age 13, as the main breadwinner for his family. Jack, and his siblings under his guidance, augmented the family income by picking fruit and helping with the pruning. Two years after his father’s death, Jack went to work in the logging camps in the Trepanier Creek area.

During World War I, Jack saw action with the 318th Canadian Infantry Battalion of the Canadian Expeditionary Force. After his war service, Jack returned to Winfield where he set up the Seaton Fruit Company. He later joined his own logging company with that of The Main River Sawmill, making him one of the largest logging contractors in the area.

Jack Seaton owned 110 acres of orchard land and two packinghouses. In addition to his logging and orchard interests, he was chairman of the Winfield and Okanagan Centre Irrigation District.

Jack married Eva Coe, the daughter of Walter and Katherine Coe  who were another prominent orchardist family, in 1924. Eva and Jack didn’t have any children but were renowned for their generosity. According to Les Clement, the one time owner of the Winfield Store, “Jack was always there to help anyone get started”. Many said that Jack Seaton was Winfield’s unofficial bank as he loaned money to many young men who were starting out, yet never let it be known to anyone.

From 1921 through 1925, Jack was the foreman of a crew hired to lay the CNR rail lines from Kamloops through Winfield and then on to Kelowna.

Jack and Eva were always active in the community and supported many worthy causes. Jack was a member of the Winfield Memorial Hall Board for many years as well as being a member of the Royal Canadian Legion.

Jack died in 1965. His funeral was like a ‘mini League of Nations’. He was buried in Lakeview Cemetery, overlooking the hills that he had logged, and Duck Lake, where he had loved to watch the wildlife.