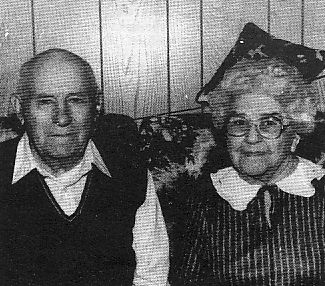 Reiswig Road was first established in 1947. The road started at Woodsdale Road and terminated in a dead end. It was not paved until 1962.

Reiswig Road is named after early pioneers Dan and Lucy Reiswig. Dan, who came from South Dakota, arrived in Armstrong with his family when he was only six years old. Lucy, a native of Winnipeg, moved to the Armstrong area with her family at age sixteen. Dan and Lucy met in school and after they married, they moved to Alberta where Dan found employment in grain farming. It was there that Dan built the first of ten sawmills that he owned and operated over many years.

Dan and Lucy moved back to the Okanagan and set up a home in Winfield. Dan continued to operate sawmills in the China Valley, Falkland, Chase Creek, Grinrod and Malakwa.

The Reiswigs had six children, three boys and three girls, and most of their descendants still live in the Winfield area. The Reiswigs were well-known members of the Winfield Seventh-day Adventist congregation and Lucy taught children’s classes in the church.

Even in his retirement, Dan still kept busy. He built cedar chests for each of his children and grandchildren. Lucy was a very active member of the Dorcas Society, a group that met once a week to make quilts.