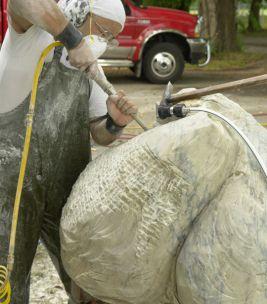 Pair in Love is one of four marble sculptures commissioned by the Public Art Commission, originally to commemorate the tenth anniversary of the incorporation of the municipality of Lake Country. Problems in getting the marble blocks from the quarry to Swalwell Park where the sculptures were carved delayed the work until the summer of 2006.

Moriyuki Kono, an artist from Abbotsford, in accordance with the theme of celebrating the tree fruit industry, created Pair in Love. The work was unveiled in Swalwell Park on October 1, 2006. At that time, the ‘stems’ had not yet been attached but were placed after the sculpture was located to Pioneer Park in Oyama.