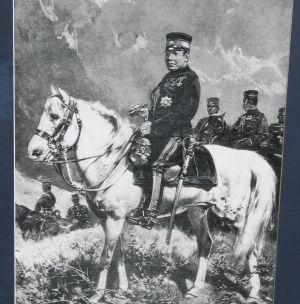 A Post Office was established in the home of Dr. W. H. Irvine’s in 1906 with Dr. Irvine acting as the first Post Master. Dr. Irvine’s mother suggested that it be named after Oyama Iwao, a Japanese Field Marshall, whose name figured prominently in the newspapers during the Russo-Japanese War of 1904-1905.

IWAO OYAMA, Prince (1842-1916), Japanese field-marshal, was born in Satsuma. He was a nephew of Saigo, with whom his elder brother sided in the Satsuma insurrection of 1877, but he nevertheless remained loyal to the imperial cause and commanded a brigade against the insurgents. When war broke out between China and Japan in 1894, he was appointed commander in-chief of the second Japanese army corps, which, landing on the Liaotung Peninsula, carried Port Arthur by storm, and, subsequently crossing to Shantung, captured the fortress of Wei-hai-wei. For these services he received the title of marquess, and, three years later,, he became field-marshal. When (1904) his country became embroiled in war with Russia, he was appointed commander-in-chief of the Japanese armies in Manchuria, and in the sequel of Japan’s victory the Mikado bestowed on him (1907) the rank of Prince. He received the British Order of Merit in 1906.

For further information and a photograph of Oyama Iwao see Wikipedia entry.