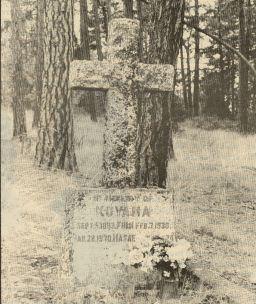 The old cemetery dates from between 1906 and 1908 when the Maddock Brothers gave a lot of land (East half, Lot 66, Plan 444) for the cemetery, land where ‘several bodies had been buried’. The Museum has a copy of a ‘Deed of Land’ documenting the gift but it apparently was not registered in Kamloops. It wasn’t until 1918 that a formal meeting was held to organize the cemetery, survey the property, clean up the lot and mark out plots. It was found then that a portion of the land’s sub-soil was hardpan and therefore unusable. Despite this, there were burials in the cemetery until 1975.

There is no complete record of the burials because a fire destroyed the records about 1930, but there are 28 known graves, 10 other graves and 5 suspected sites. There are a total of 35 named persons buried in the cemetery, 9 of whom were Japanese. Many of the headstones are carved with oriental script.

Sometime about 1906 to 1908 the Maddock Brothers, former owners of OK Centre & Land Valley Co., gave a lot for the cemetery, where several bodies had been buried.

From 1908 to 1918 several cemetery meetings had been called, but owing to lack of attendance, nothing could be done until the cemetery question was put before a meeting on December 28, 1918.

A public meeting held at Wood Lake School House, now the Winfield Hall, when Messrs. J. Goldie, P. W. Pixton and S. Edwards were elected as trustees for the cemetery, being requested if they could arrange to secure title deed of property and to take whatever steps they deemed advisable and to get the cemetery surveyed, cleaned up and mark out a small portion of ground for graves. Also, at a later date, to report at some public meeting the expenses incurred when funds would be raised to cover same.

Shortly after this meeting, Mr. S. Edwards left the district and Mr. F. C. Baker was chosen as trustee in his place. The trustees took steps to have three acres surveyed to 75 feet x 120 feet, or little more than one quarter of an acre, marked and pegged out for graves; the cost of same was $44.00.

Men were employed cleaning up, burning brush and logging off old trees, etc.; the cost of same being $77.00. Agent’s charge for deed was $6.00.

It is much to be regreted that on digging for a grave in the newly surveyed portion of cemetery, it was found that subsoil was hardpan. The community being informed of this condition, many said a new plot should be found and bodies removed.

We regret to report although much time was given to locate a new cemetery, it was found impossible to do anything in this line. Already a debt had been incurred by the trustees — nothing has been done to pay this off, and who can be expected to undertake the expense of laying out another plot of ground and removing the bodies which now lay in the old cemetery.

The trustees made a charge of $8.00 a grave for burial; this charge was paid to the trustees against the debt.

It is in our opinion that quite a portion of the present cemetery can be used for burial, which should last for several years. The trustees are not only out of pocket but they have been put to a considerable amount of trouble and time, not only over cemetery as a whole, but over each individual burial as it has occurred.

The trustees wish to inform the district through the Men’s & Women’s Institutes that the district will have to take steps to raise funds if it is their wish that there should be a place of burial for the Winfield and Okanagan Centre District.