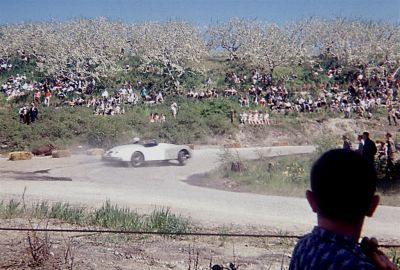 For the years from 1962 to 1965, a multitude of fast, colourful and loud race cars moved to make shift pits and prepared to show who was “King of the Hill”. Pits were on the loading slab of the Winoka Packing House that covered the entire point across from The Store, and all the empty spaces in the surrounding area. The start line was at the base of Camp Road with the previous road configuration, prior to the current three-way stop.

The route wound its way up past Gray Monk Winery with the long, straight road leading to the S-turns at Camp and Davidson and the finish line a few hundred meters beyond that intersection on Camp Road.

After their practice and timed runs, which spanned three days, the competitors would return to the start-line via Camp Road and Okanagan Centre Road East.

By 1964, the event had gained prominence throughout the Pacific Northwest and race drivers from circuits such as Westwood in Coquitlam made the trek to Okanagan Centre. The Okanagan Hillclimb event had become hugely popular with, at one point, a reported 5,000 spectators in attendance.

For the 1966 event, the organizer, Okanagan Auto Sport Club (OASC), B.C.’s second largest motor sport club, recognized that the Hillclimb had grown much too large for the venue and approached the City of Kelowna for permission to use the newly-paved Knox Mountain Parkway. Mayor Dick Parkinson and the Kelowna Chamber of Commerce enthusiastically granted permission. Camp Road reverted to its somewhat sleepy status of a picturesque local road.