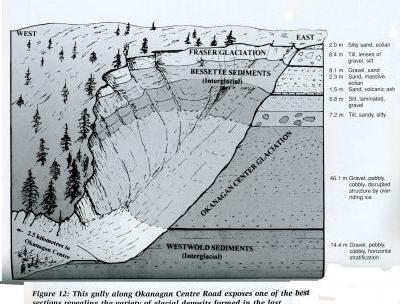 Three kilometres south of Okanagan Centre a sequence of glacial and nonglacial sediments ninety-eight metres thick is exposed in a gully on the east side of the road. Fulton and Smith (1978) of the Geological Survey of Canada determined that they represent the last two major glacial advances (25,000 and 50,000 years ago) separated by a non-glacial interval, and an older Interglacial interval (100,000 years ago).

The deposit that is laid down directly when glacier ice melts is called till. The till of the Okanagan Centre Glaciation is underlain by a series of glacial lake deposits, sand, gravel of glacial and fluvial origin and beach deposits referred to as the Westwold Sediments. Fossils recovered from these deposits at Westwold, B. C., include plant fragments, mollusk shells, bison bones, fish, beetles, and rodents suggesting a warm climate during a 100,000 year old Interglacial period in the Okanagan.

The till of the Okanagan Centre Glaciation is overlain by another series of sediments representing a regional period of nonglacial activity referred to as the Olympia Nonglacial Interval. These sediments were formed in many valleys after the ice of the Okanagan Centre Glaciation had melted. They are known as the Bessette Sediments and are exposed in Bessette Creek near Lumby where they are 22 metres thick and consist of interbedded fluvial gravel, sand and silt containing plant remains and at least two layers of volcanic ash. These deposits are overlain by till and sediment related to the most recent Cordilleran claciation called the Fraser Glaciation.

Source: Roed, M.A. Geology of the Kelowna Area and origin of the Okanagan Valley. Kelowna, BC: Kelowna Geology Committee, 1995. pp. 43-45.