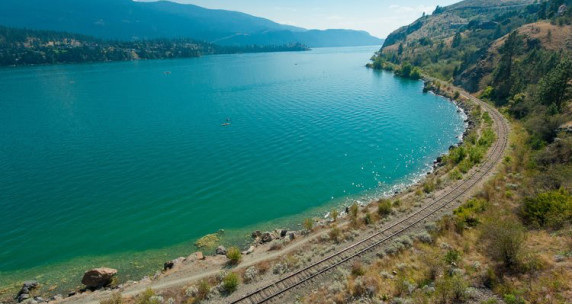 On June 2, 2015 the City of Kelowna gained title to 50 km of discontinued rail line on behalf of four jurisdictions: Kelowna, the District of Lake Country, the Regional District of the North Okanagan and the Okanagan Indian Band (OKIB). The original asking price was 50 million dollars. The total negotiated cost was 22 million dollars with Kelowna issuing a charitable donation receipt to the Canadian National Railway (CNR) for 23 million dollars. The provincial government contributed 7.2 million dollars towards the purchase but took no equity position in the project.

This deal was six months in the making. On December 1, 2014 The Morning Star1 reported that the four jurisdictions had signed a negotiated sales and purchase agreement for the discontinued rail line.

In February 2015 Lake Country Municipal Council was prepared to borrow 2.6 million dollars to pay for fifty percent of the 16 km that runs through Lake Country unless a tenth of the voters objected in an Alternative Approval Process. Nine hundred and sixty voters did object, citing various concerns — a proposed rise in property taxes, the impact on some affected groups bordering the land and unknown future costs for development and maintenance.

A referendum was scheduled for April 25, 2015 and both the Yes and the No groups waged vigorous campaigns. A record turnout of voters (47% of all eligible voters) supported the borrowing bylaw by almost 3:1.

Following that, the OKIB applied for an injunction to stop the sale. B.C. Supreme Court Justice Meyers ruled on June 1, 2015 that the OKIB claim did not meet the three-part test that merits an injunction and the injunction was not granted.

The corridor is a strip of land about the width of a two-lane road running from Okanagan Lake at Kelowna through agricultural land along Duck, Wood and Kalamalka lakes to Coldstream, just south of Vernon. The agreement stipulates that the CNR will attempt to remove the rail infrastructure from the corridor for salvage by the end of 2015.2

Source of photographs and map: the District of Lake Country, the Okanagan Rail Trail Initiative and Michael Hazen (member of the Lake Country Rail Trail Action Team) for the YES photo.