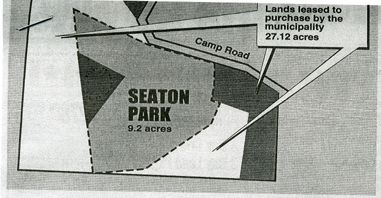 Jack Seaton Park’s 9.2 acres were unofficially donated to the municipality by the Winfield and Okanagan Centre Irrigation District. That donation was formalized when the municipality agreed to pay $575,000 for another 27.15 acres of land east and west of the Park. That purchase price included $100,000 paid for upgrading the land with water service. Council approved the bylaws for that agreement in December 1997.

The purchase is being paid in 10 annual installments of $57,500, and is being funded by park development cost charges collected from future development.