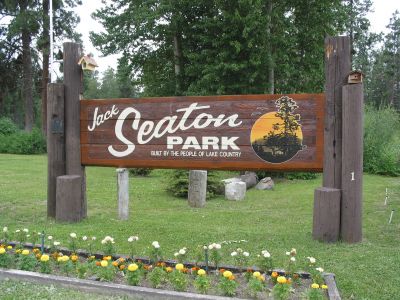 Jack Seaton Park was built on property leased from the Winfield Okanagan Centre Irrigation District for an annual lease payment of $1.00. The Park was built and maintained by a group of volunteers.

The Park was named for Jack Seaton who was a successful businessman and one of the Valley pioneers in logging. Seaton was also an orchardist, he worked on the CNR roadbed from Kamloops to Kelowna and he also served as the elected chairman of Winfield and Okanagan Centre Irrigation District from 1930 until his death in 1965. He was active in the community and a generous supporter of many worthy causes.

The Park has many trails through Ponderosa Pine woods, two baseball diamonds, tennis courts, a childrens’ play are and picnic tables.