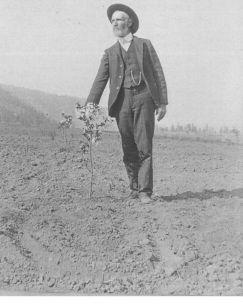 The Irvine family originated in Scotland and immigrated to the USA and Canada through Ireland.

Doctor William Irvine arrived in Oyama first in 1904, from Pilot Mound, Manitoba. He bought forty acres of land on the west side of Wood Lake and Long Lake from Frederick J. Gillard. William was the first orchardist of the family. He supposedly planted one of the first cherry trees in the area in 1905-1906. He also helped establish Long Lake Irrigation Co.

John Irvine and wife Annie, along with Henry, Emma, Barbara and Jr., came to live in Oyama about 1905; Ida and Jennie followed and Minnie arrived in 1912. Jennie became ill and wished to return to her old home so William took her back to Kingston, where she stayed until her death in 1918.

John built the house at the bottom of Irvine Road in Oyama for Henry and William about 1905 and then he and Annie went to live in Victoria for a year. They didn’t like the weather so they moved back and built a house in Vernon.

The John Irvine family moved to Oyama in 1910 and bought 22 acres from the rest of the family. John built or remodelled a house on the upper road. They sold it in 1916 to build a new house.

Elizabeth (Henzy) Irvine, wife of John Irvine Sr., was the person who submitted the name ‘Oyama’ (after the Japanese Field-Marshall Iwao Oyama) to the Canadian Government for the name of the Post Office. Henry Irvine was the first postmaster in Oyama; he was appointed on May 1, 1906. A Post Office was established in Dr. Irvine’s home in 1908.

Barbara Irvine was the first school teacher at the old white school, built in 1911. Emma and Minnie Irvine acted as substitute teachers.

In 1927, William Irvine, John Irvine and Edgar G. Sherwood created the Unity Fruit Co. Ltd. They bought out the shares of the Co-Operative Farmers and moved such equipment as the grader to Vernon. The last Unity Fruit building was built in 1948. It was destroyed by fire on October 30, 1960. The packinghouse closed in 1960 due to fewer orchards in the north Okanagan.

John Herbert Irvine died on March 21, 1951, aged 86. He was the last of three brothers who were among the first to plant commercial orchards at Oyama. He came to Vernon in 1904 and went to Oyama in 1910.