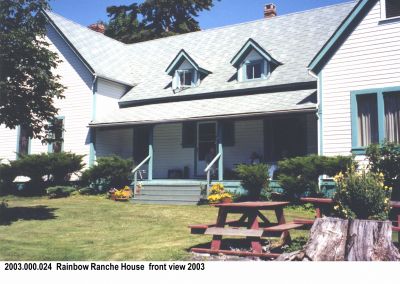 The name Goldie was, and still is, a well-known name in Okanagan Centre. James Goldie arrived in the area on board the S. S. Okanagan in 1908. Not long after settling in Okanagan Centre Mr. Goldie, along with Robert S. Dormer, bought Mr. Robert Hewers’ half interest of Rainbow Ranche.

Soon after purchasing the Rainbow Ranche James met the beautiful Jessie Ross who was the great grand-daughter of a British quartermaster who had settled in Quebec sometime during the latter part of the 1770s. Jessie became James’ wife in February 1913 and one year later their first child, Anne, was born. Jessie and James went on to have two more children, Nancy and Bob.

Mr. James Goldie managed the Rainbow Ranche for 40 years until 1948 when the property was sub-divided into ten 12 acre lots. The family owned a large plot of land which included the house along with some of the lakeshore and both James and Jessie stayed in their home until they passed away in the early 1970s. Today Nancy McDonnell (nee Goldie) lives in the house on Pixton Road.

Many of the early Japanese settlers in Okanagan Centre worked in the orchards at Rainbow Ranche under the management of Denbei Kobayashi.