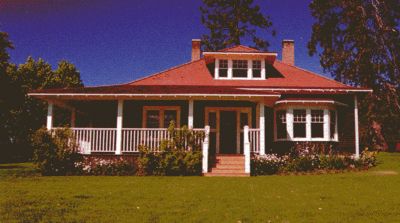 In 1912, George Gibson hired local carpenter Teddy Hare to build the beautiful two-storey family home with its large verandahs in the style of the day, to which Gibson brought his bride after their wedding in England.

Jim Gleed, a local stonemason, built the pink granite fireplace in the sitting room, and a rock wall to contain the lawn and garden above the beach.

Gibson joined the Canadian Army in 1916. He transferred to a British regiment in England, where his wife and baby daughter Pamela had moved ‘for the duration’ and in 1918 a second daughter Joan was born. Gibson was taken prisoner in Lille, France, and sent for six months to a prisoner of war camp on the Baltic Sea.

After the family was repatriated to Canada in 1919, Gibson turned to mixed farming.

For a number of years, the Gibsons invited the Kelowna Sea Cadets and Girl Guides to use part of the shore for their annual summer camps. That property, at the very southern boundary, was eventually purchased by the Girl Guides of Canada and named Camp Arbuckle for Ida Arbuckle, District Commissioner for Kelowna.

Many descendents of the Gibsons still live in Lake Country. The house has been entirely restored and refurbished by community donation. It is furnished with artifacts from the 1910-1930 and contains local historical information. It is open on weekends during the summer.