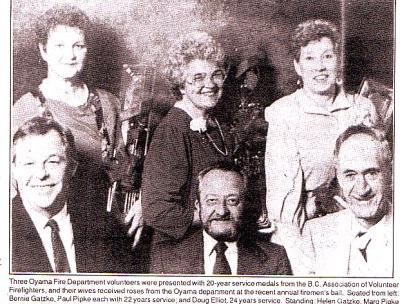 Gatzke Road in Oyama begins at Highway 97 and is a dead end road. The road is named after a prominent Oyama family.

In 1928, at the age of 20, Wanda Hardwig emigrated to Canada from Poland. She settled in Vernon and worked at Bulman’s Cannery. In 1931 she married Leo Gatzke.

Wanda and Leo moved to Oyama in 1939 where they purchased their first orchard. Wanda and Leo had five children: Donald, Bernie, Arnold, Alfred and Eileen.

During the 1940s and 1950s, at a time when the fruit industry was very prosperous, Leo and Wanda bought more property, expanding their orchard operation to 60 acres. The Gatzkes worked their orchards until they retired in 1980, when they sold part of their operation to their son, Bernie, and his son, Allan.

Bernie served for many years as a volunteer firefighter with the Oyama Fire Department. His wife, Helen, served as the Oyama representative on the Board of Trustees for School District #23. She also was a Founding Member and the first president of the Board of Directors of the Lake Country Museum.

Allan Gatzke married Ingrid Tepper of Winfield in 1983 and together they expanded into ‘agritourism’ by not only selling fruit from their Highway 97 stand but adding preserves and bakery items. Approaching the fruit stand, tourists can view the many old pieces of farm machinery, some of which were once used on the Gatzke property. Under Allan’s ownership, the Gatzke farm is now said to be one of the largest operations in British Columbia.

In 2001, Allan Gatzke won the civic by-election as councillor-at-large.

Leo Gatzke and son, Donald, predeceased Wanda Gatzke who died in Kelowna on November 12, 2001. Most of the Gatzke descendants still reside in this area today and have given a lot of their time to the community.