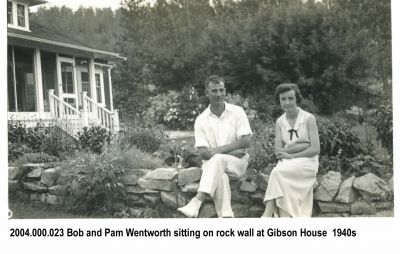 Built in 1913 by Teddy Hare, Curly Carter and Jim Gleed, Eversley House was built for George Gibson. Eversley was named after the place in England where Gibson came from.

Gibson lived there until the 1940s when Ernie Broome of Vancouver bought it. There were little bunk houses and cabins built around the Eversley house in the Broomes’ time.

Ernie was an Member of Parliament for Vancouver South with Diefenbaker in 1957-1960 and a Vancouver Alderman for years. He ran Eversley as a summer children’s camp and called it Camp Kopje after the hill located behind it. Spion Kopje, pronounced “copy”, was named after a battle in the Boer War, though it is not known by whom.

Mr. Gibson picked up all sorts of arrowheads and artifacts on the site, suggesting it was an Indian gathering ground. Mrs. Gibson gave them to Gilbert Arnold of Winfield after her husband’s death.