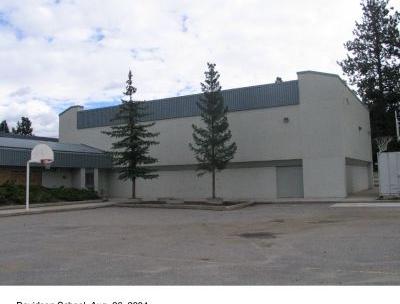 Davidson Road Elementary is situated just off Davidson Road in Winfield. Construction began in 1983, and was completed in 1984. Because of the topography of the seven acre property, a unique design was adopted, and to provide a level playground area, the two-storey building was set against a bank. There were six classrooms, a kindergarten room, a gym, a library and auxiliary areas. Two portables were needed in the very first year as there were 215 pupils registered. A staff of fourteen tended to their needs.

The school was officially opened on December 4, 1984 by the Minister of Education, Mr. Jack Heinrick. The first principal was Howard Jakubec, and he remained at Davidson Road Elementary until 1989.

Improvements and growth continued at the school with the installation of new playground equipment, including a circular slide, funded by the Parents’ Auxiliary Council.

From 1989 to 1991 Sandra Sellick was the administrator. This was the beginning of computer programs in School District #23, and at Davidson Road Elementary the first computer lab was set up. The Year 2000 Educational Program begain in 1990 but was only in effect for a few years.

Lorne Brown was principal from 1991 to 1995. In 1992, the addition of four classrooms and a multi-purpose room increased the number of divisions to sixteen. By 1994, there were four portable classrooms as well.

In September of 1995, Roland Harvey became principal. The tenth anniversary of Davidson Road Elementary was celebrated in early 1996 with an afternoon assembly program and social enjoyed by students, staff, parents and guests.

In 1997, seven portables were utilized, bringing the number of divisions to eighteen. A teaching and administrative staff of twenty-two attends to the educational needs of the 441 students.

Source: Dillman, Emily. “From Slates to Blackboards to Computers”.

In 2000, a $1.2 million, 8,000 square foot addition to Davidson Road Elementary School was completed. This included nine additional classrooms and new washrooms with curved entries in the place of doors. For Davidson Road principal Dee Morrison, who took over from Roland Harvey, the additional classrooms mean staff and students can say goodbye to their fleet of portables which were parked just south of the main building.

Davidson Road expects their numbers to climb and they added one class to encompass some of the growth.