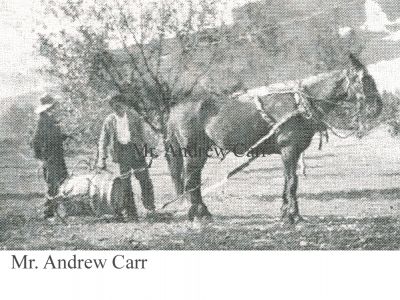 Carr’s Landing Road was first established sometime prior to 1890. It begins at the junction of Commonage Road in the north and ends at Okanagan Centre Road in the south. It was unpaved until 1977. The road takes its name from an American Civil War veteran, Andrew Carr, who was born in the United States in 1841.

Andrew Carr arrived in the Vernon area around 1891 with the intention of buying land. In October of 1892, the Government auctioned off large parcels — a total of 25,114 acres — of land in the Commonage. This area had been set aside as grazing land to be used jointly by Indigenous peoples and European immigrants, hence the name ‘Commonage’. It was here that Andrew Carr bought some land in that part of the Commonage known as Sunnywold.

Even though Carr bought the Sunnywold land in 1892, early records show that up until 1898 he was still residing in Vernon. However, three years later in 1901, a census indicates that Carr had moved on to his Sunnywold property.

Andrew Carr became a Canadian citizen in 1895 and he listed his occupation as a farmer. He hired a Swedish immigrant, Joseph Hultman, a 30 year old labourer to help him run his farm.

On November 20, 1901, Carr married a 42 year old widow, Agnes Kennedy, from London, Ontario. The couple was married at the home of J. W. Bailey, a very well known brick maker from the North Okanagan region. Two months after their marriage the Carrs moved on to their property which was located where the Coral Beach Farms are today. On the land they planted various types of fruit trees and had a wharf built in front of their property. Carr’s Landing (wharf) became a regular stop for the paddlewheelers that travelled up and down Okanagan Lake delivering mail and supplies and picking up produce. It was said that Andrew Carr would personally hand out the mail to those waiting on the wharf when a paddlewheeler docked.

Andrew Carr left his name as legacy in this area although his stay at Carr’s Landing was short. He died at the age of 68 in 1910, only nine years after his marriage. Agnes lived for another 31 years. She died on April 25th, 1941. Both Andrew and Agnes are buried in the Vernon Cemetery.