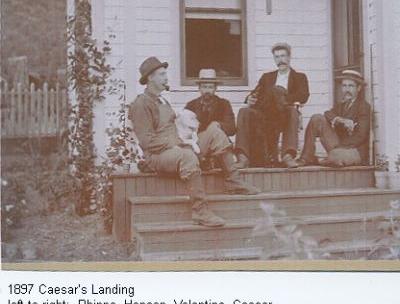 Around 1896, when the Barr brothers wanted to join the gold rush, Northcote Caesar and his friend T. F. Valentine bought the Rainbow Ranche from them for $2,000. They had no cash so they paid for it — half in notes which they hoped to make good by harvesting the timber on it, and half with a mortgage at 12% (later 8%). They planted wheat which was only semi-successful because of the lack of irrigation and because free-ranging cattle liked to eat it.

Northcote H. Caesar was born to a middle class family in the village of Downton near Salisbury in the south of England. He was born with a clubfoot and he had to wear an iron brace during his youth. Despite this disability, he was an ardent sportsman and participated and excelled in many sports during his school years. His foot did prevent him from realizing his dream of joining the Royal Navy. Caesar sailed for Canada in 1883 at the age of 18 in search of his fortune in gold or, at least, adventure.

His first adventure was homesteading in Manitoba — building a sod hut, digging a well and planting crops. It was not a successful venture and he left it to his friend, T. F. Valentine. Then he moved to Vancouver where he worked at a number of varied jobs until he contracted rheumatic fever and moved to the Okanagan on the advice of his doctor. He moved to Vernon and then pre-empted a piece of land on the west side of Okanagan Lake that became known as Caesar’s Landing. His friend Valentine couldn’t make a living on the Manitoba homestead and he came to join Northcote in a number of business ventures including cutting cordwood for the paddlewheelers, and using the boat that they built to haul ore & dynamite, tow logs and ferry the Kelowna cricket team around.

By 1899, Caesar and Valentine decided to split up their assets and Caesar bought shares in a mine in the Big Bend area where he ran a hydraulic mining operation. [The Museum has some excellent pictures of this operation, taken on glass plates] He used his profits from the mine to pay off the mortgage on the Rainbow Ranche that he then sold to his tenant, Mr. Pow. He reserved 18 acres on the south end of the Ranche that he called Sundial. Meanwhile, he married Miss Rosalie Mabel Comyn Ching.

Miss Ching came from an old Cornish family and they were married in 1905 in Winnipeg where her brother was a minister. They returned to the Okanagan and had one child, Winifred (Bernau). The Caesars farmed their 18 acres and Northcote speculated in land in Winfield and Okanagan Centre. In 1907, he bought 13 of the 25-foot lots in Okanagan Centre. He built the elegant Grandview Hotel [where the Museum sits today] and rented it out. The Hotel burned down in 1919.

Northcote Caesar never did become rich but he and his family lived reasonably comfortably. He spent the last twenty years of his life as an invalid in his home at Sundial. He died at age 92 in 1957.