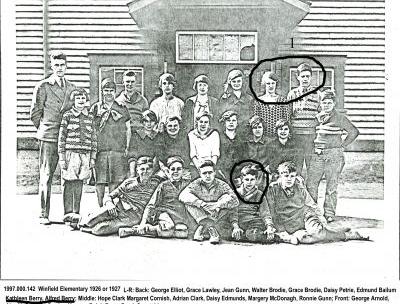 Berry Road in Winfield got its name from one of the areas early pioneers, Ralph Berry.

Ralph was born in Devonshire, England, and arrived in Canada in the early 1900s. He first settled in Ontario where he married. He and his new Canadian wife moved to Manitoba in 1910 where five of their children –Holly, Alfred, Kathleen, Ralph and George — were born.

The Berrys had three more sons — Gilbert, Eldred and Gordon — but Gordon died soon after his birth. The Berry children attended the first Winfield school, located in the Community Hall and later went to Winfield Elementary School which was built in 1922. The Berry family were, and still are, a well-known family in the Winfield area.