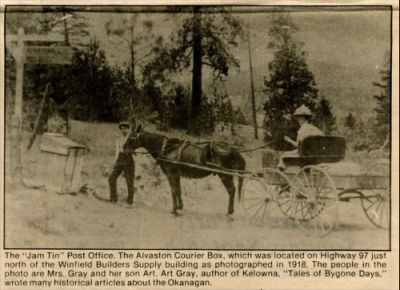 The forgotten name is Alvaston.

Arthur Chatterton, the first Postmaster of Alvaston, was actually born in London, England, in 1876 but his father, George Joseph, was born in Alvaston, Derbyshire, and his grandfather, John, held a considerable amount of property in Alvaston and was appointed as Overseer to the Poor in the mid 1800s.

In the 1881 British Census, George Joseph was listed as a Commerical Clerk in London and had quite a large household including a servant.

Arthur’s brother, Richard, was witness at Arthur’s marriage to Alice Waters at St. Andrew’s Church in Vernon on 18th December, 1907. Richard was living at Okanagan Landing at the time. Arthur’s address is shown as “Woods Lake, near Vernon, BC”.

The Post Office of Alvaston existed for ten years — 1909 to 1919. For a Post Office that was open for ten years it is a surprisingly scarce mail marking. There is, however, a very good reason for this scarcity over and above the obvious one of a lack of local population making use of the Post Office service. The Post Office was located about half a mile from the mail coach route that kept to the Okanagan Mission to Vernon road and more use was made of the packing case at the sign on the stagecoach road than of the Post Office itself. Ingoing and outgoing mail was placed in the packing case, left by, or to be picked up by, the Vernon-Kelowna stage. Also in the packing case was a jam tin containing a small supply of stamps for which money was left in the tin by anyone needing stamps.