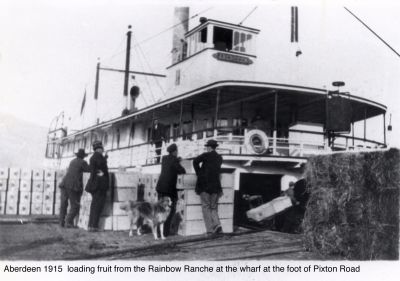 A classic western sternwheeler, the S. S. Aberdeen was completed in 1893. She was 44.5 m. (146 ft.) in length with a cargo deck capacity of 180 tonnes (200 tons). She was named after John Campbell Gordon, 7th Earl of Aberdeen, who owned the Coldstream Ranch in Vernon and who was made Governor General of Canada in 1893. The vessel, Aberdeen, was built to extend the Shuswap & Okanagan Railway line from Okanagan Landing down the lake to Penticton. The sternwheelers hauled fruit, lumber and supplies and carried passengers up and down Okanagan Lake.

Source: Turner, Robert D. The Sicamous & the Naramata: Steamboat Days in the Okanagan.