The research, design and construction of five heritage markers along the Okanagan Rail Trail is a project of the Lake Country Museum & Archives. It is supported by the Province of British Columbia through the British Columbia | Canada 150: Celebrating B.C. Communities and their Contributions to Canada grant program. Don McNair is the designer and principal researcher of these panels.

These heritage markers will be erected at pullouts where cyclists and hikers are likely to gather, to access the trail, enjoy a lunch at a picnic table, or spend a few minutes gaining insight into the Native and non-Native history of our community. More panels will eventually be added along the Rail Trail, along Pelmewash Parkway and elsewhere in the community.

The first site is at the junction of McCarthy Road and the Rail Trail and features two panels relating to the history of that particular location. The first panel features aspects of logging the flats and the hillsides on both sides of the valley, a precondition for the farming and orcharding industries that followed.

The panels are self-explanatory but brief due to space limitations. The Lake Country Museum and Archives holds a good deal of supplementary material and the Museum website blog explores some of these topics more fully (for example, building the Oyama canal and the use of log chutes). One document at the Archives is the reminiscence of Clara Hallam (née Clarke)1 who was raised in Fir Valley, the settlement located up the Beaver Lake Road. She wrote about clearing the land of forest:

“Where the Okanagan Centre Land and Orchard, or all the land between Winfield and OK Centre that is in orchard now, used to be the nicest stand of big pine and fir trees. Johnston and Carswell logged it all off in 1908 or 9. My brothers, James and Bill, the Clark boys, Lidstone boys, Pete Bradshaw, and Tom Johnson and several others that had settled around there helped to log it off about 1909 or 10.”2 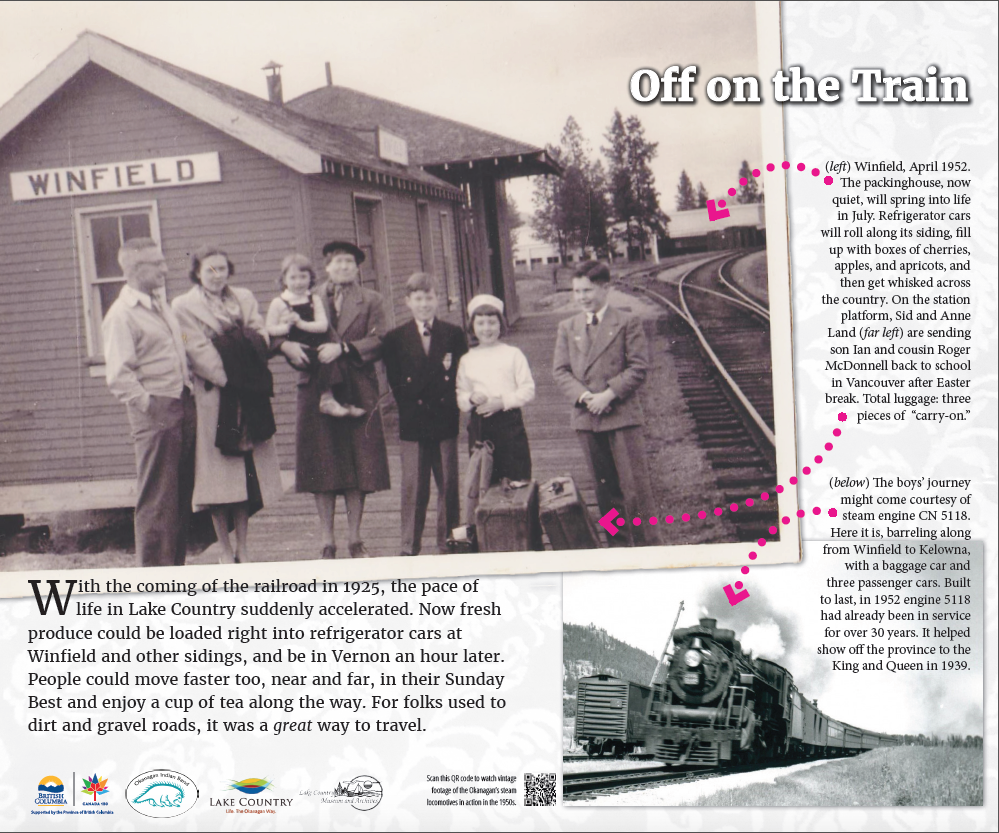 The second panel at this site features the nearby railway station and packinghouse. This panel illustrates two major features of the railroad, passenger transport and commerce. Stations along the route from Kelowna to Vernon were found at Rutland, Winfield and Oyama. These small stations were all designed for an attendant to serve the public but they never seemed to be manned. In the featured Winfield station the nearest door led to the “office,” where a ticket master supposedly attended, and the second to the passenger waiting room furnished with wooden benches around the perimeter. The roofed shed at the far end was an enclosure to store freight away from the elements while awaiting the arrival of the train. Rail cars were generally loaded with fruit or lumber on a siding, not from this station. This platform was used occasionally for loading a few boxes of apples being sent to relatives on the prairies or small lots of goods, loaded mostly by the sender in the few minutes that the train stopped. In the 1950s the Oyama station was used primarily by the community as a changing room for folks using the wonderful public beach across the tracks.

1 Our life and school days in the sunny Okanagan. Reminiscences of Clare Hallam (née Bailey), part 1.

To view an earlier article about the Heritage Markers which shows two other panels, go to History Panels along Okanagan Rail Trail on this website.