“Symbolic in both Native and modern cultures, Bald Eagles are one of the most majestic birds in British Columbia. Each autumn and winter, thousands of eagles gather at spawning sites to feast on spawned-out salmon ….”

Although “[e]agles mate for life and can live up to 40 years … [they] do not mate until their fourth or fifth year, when they develop the characteristic white head and tail plumage. These birds reuse their nests year after year adding sticks each year until the nest grows to mammoth proportions. The largest nest found in BC was six metres deep!”

A few years ago we watched eagles in action — right through our front windows! A dead deer had floated on to our beach in late December and by January the eagles were enjoying a feast. Neighbour, Ward Strong, set up a remote camera and captured the following amazing images. Click to enlarge. 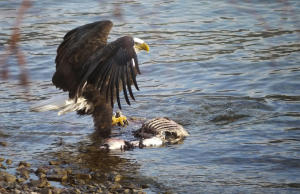 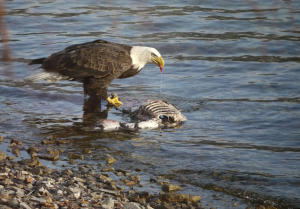 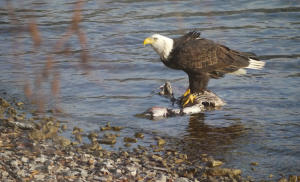 To learn more about these interesting birds, and other birds of the Okanagan, please plan to attend From Eagles to Hummingbirds. A Year of Okanagan Birds, a public lecture by Pam Laing, sponsored by the Lake Heritage and Cultural Society.