“Many Canadians are unaware of how broad and important a role Canada played in the Second World War, particularly in the Battle of the Atlantic, arguably the most crucial battle of the entire war, and on the sands at Juno Beach and in the Scheldt region of the Netherlands.

Tens of thousands of Canadians perished in these theatres of battle, in the icy waters of the North Atlantic, the fields of Normany and the mud of Holland. But they did not die in vain. 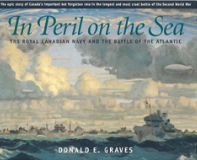 In Peril on the Sea1 (2003) by Donald Graves is the meticulously crafted historical narrative of a forgotten service. During the Second World War, the Royal Canadian Navy (RCN) expanded from a tiny squadron of 10 warships in 1939 to the third largest Allied navy by 1945.

For nearly six years, the RCN escorted supply convoys in the grim theatre of the frigid Atlantic, where the weather proved to be an enemy almost as dangerous as the German U-boats on the prowl.

The author, one of this country’s preeminent historians, tells the fascinating saga largely through the accounts of Canadian, British and German soldiers, submarines and merchant seamen, the participants in the war’s longest operation.

These personal accounts, along with nearly 200 photographs, drawings, maps, graphics and ship profiles, impart a vital immediacy to the stirring story of the relentless struggle of our sailors and merchant mariners and their undaunted courage to preserve the sea lanes to Britain, and later Europe, and enable the Allies to finally launch the D-Day invasion.

The Battle of the Atlantic2 (2015) by Jonathan Dimbleby is a gripping tale that provides greater context and in the process transforms our understanding of the Second World War.

It is a convincing argument that clearly illustrates the crucial importance of the epic campaign — if the wolf packs of German U-boats prevailed and severed the lifeline across the Atlantic, mass hunger would have consumed Britain, perhaps compelling this country to seek terms, and the Allied armies certainly would not have invaded Europe in 1944, if ever at all.

This impressive volume draws on painstaking research, primary accounts and secondary sources to weave a fascinating saga of strategy and tactics between the stealthy German submarines and the Allied efforts to develop an effective defense against attack. And the personal accounts, including the riveting descriptions of a long struggle to survive in a life raft in the freezing North Atlantic or being depth-charged for hours 700 feet below the surface of the ocean, breathe life into the work, in much the same fashion as personal accounts chronicled In Peril on the Sea.

The Best Little Army in the World3 (2015) by J. L. Granastein, an equally accomplished history, is the compelling story of the Canadian First Army that clawed its way off Juno Beach at D-Day, fought in bocage of Normandy and to the terrible battles in the Scheldt and finally into Germany in 1945.

This country, without any army to speak of in 1939, raised a citizen army and turned it into one of the best fighting armies of the Second World War, one that played an important role in helping to defeat an implacable, desperate and experienced German army over the course of eleven months in 1944 and 1945.

The Canadian army evolved from a largely amateur force in the first three years of war to a supremely skilled and formidably equipped army by late 1944 that prevailed against the Wehrmacht, a first-class enemy and perhaps the best army the world had ever seen.”

These books are available at the Okanagan Regional Library.

1 Donald Graves. In Peril on the Sea: The Royal Canadian Navy and the Battle of the Atlantic. Toronto, ON: Published for the Canadian Naval Memorial Trust by Robin Brass Studio, 2003.

2 Jonathan Dimbleby. The Battle of the Atlantic. How the Allies won the War.  London, UK: Viking, 2015.