If you can identify this object, your age may be showing! And that’s a good thing. 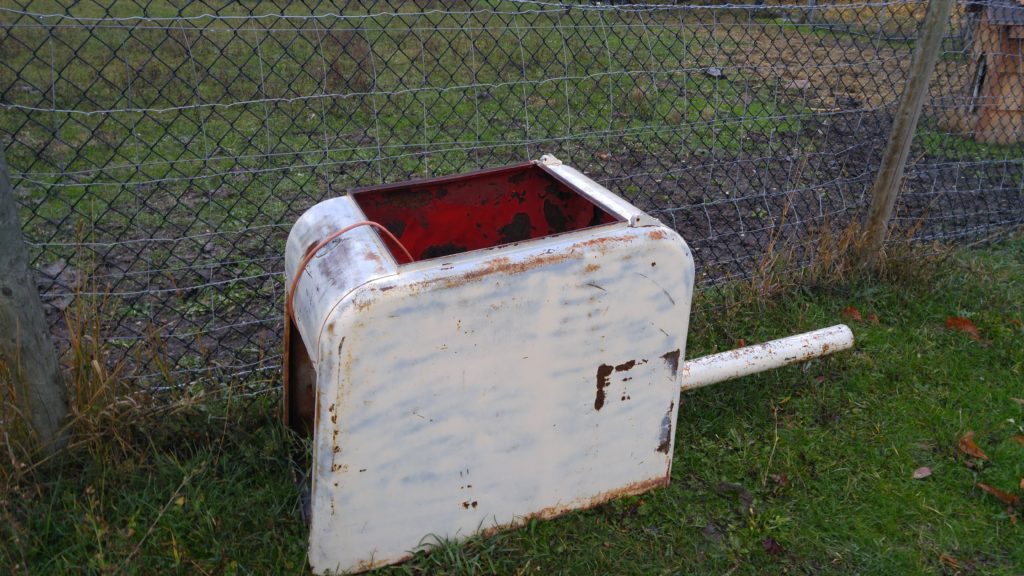 I know what it is!  It is a coal stoker!  At least that was what I always called it.  You, or should I say “I” would fill the bin with coal and an auger ran through the pipe into a coal fired boiler.  In the 50s it was cutting edge technology with the coal supplied to the boiler fire box controlled by the fire and the boiler water temperature.  It meant you only had to shovel coal into the boiler once every 6 to 8 hours.

When I was growing up (to use the term loosely) in Manitoba1 we had coal heat.  From the time I was about 6 years old it was my job to be sure the stoker was full for the night.  More than one night I forgot and there is a smell that comes from an empty stoker that, once you have smelled it, you never forget!  You also never forget the feeling of standing in a coal bin in the middle of the night in your bare feet when you are 6 years old!

Every few days you also had to remove ash and “clinkers” from the firebox in the boiler which was actually kind of fun…compared to shovelling coal! Although doing it while the boiler was “firing” always added bit of excitement!

Actually, we not only had coal heat but so did most other people in our small community.  My parents owned a lumber yard which also sold coal so every fall from the time I was 6 till I was 11, I would spend the time after school and weekends unloading coal from box cars into a storage shed.  Luckily enough, I never had to shovel it into a truck and help deliver it to houses.

The moment I saw it sitting on the side of the road in Oyama I knew what it was and memories flooded back.  It would be interesting to know how many other people in Lake Country remember stokers and coal heat!