This post continues the Camp Kopje reminiscences by Douglas Broome.

“The main body of camp was laid out along 1,200 feet of pebble beach. At the northern end was a modern PanAbode cedar log home with large verandah and a lawn down to the lake at a spot where a sandbar ran a hundred metres out to the island. Here you could walk on water a knee deep.

This sandbar was God’s terrible, swift sword, living proof of divine justice. Several times over its 14  years Camp Kopje was buzzed by young males in speedboats, always approaching from the south because that’s where the people were. Girls and staff would try to warn them but the buzzers couldn’t hear because of their desecration of the silence. And so we watched their last 10 seconds before the scream of propeller and motor pistons coming to an instant stop, sometimes the splinter of wood as the motor rips off. When peace was restored, campers on the wharf could yell and tell the boys about the sandbar and how to pull their wrecked boat ashore.

‘Michael row your boat ashore’ was a campfire song, one of many ‘Negro’ spirituals we sang around the beach fire each night. Kelowna was a small city then without light pollution, and the west side of the beach had only a few lights. When sleeping outside on the hill the whole Milky Way shone, and shooting stars were common, and some nights plentiful, something to marvel.

On Sundays we climbed the hill to the chapel which was a rock cairn, the outermost rocks painted white and adorned with words of peace. Climbing to Sunday service we sang ‘We are climbing Jacob’s ladder’ and at the worship I remember we always sang ‘This is my Father’s world and to my listening ears, all nature sings and round me rings the music of the spheres’. 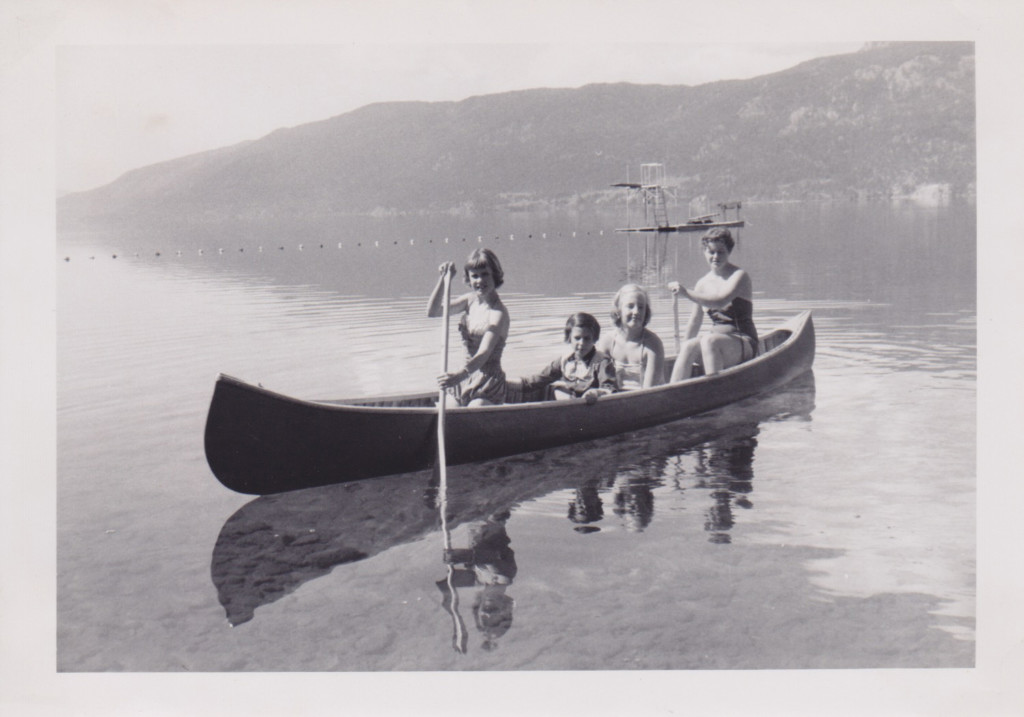 On some Sundays the lake was glasslike, not a ripple, though as an adult I have never seen the lake so still.

Kopje was outstanding in its programming. The centre of the camp was the old house, a masterpiece of panelling with two great fireplaces, one in the living room and one in the dining hall built matching the home’s architectural style. A massive cast iron wood stove was still used for some of the cooking but most was on modern ranges. There was another potbellied stove in the home’s dining room. My favourite place was the old living room with gigantic stone fireplace. 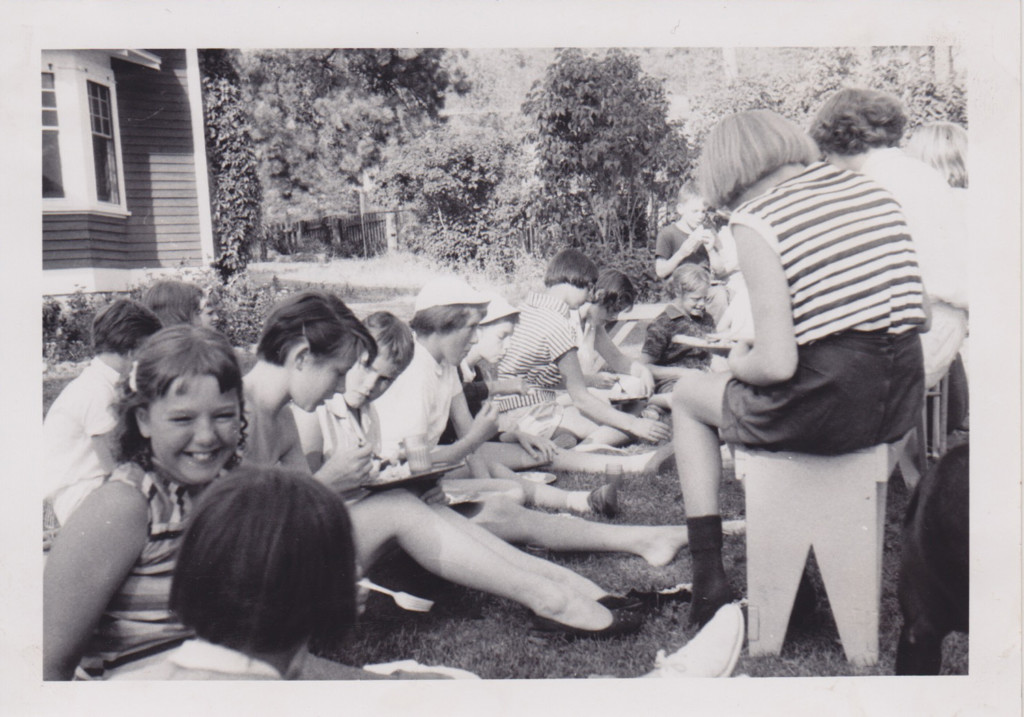 A large lawn was the place for games and fairs and mother’s classical music. It was raised from the beach by a stone wall. The long wharf was directly below the house with a side dock for a high slide which Rufus, the camp labrador retriever, loved going down. Buoy lines from the long wharf and the slide dock led out to the diving raft with its one metre and three metre boards. All the kids took swimming lessons there getting certified up to the bronze medallion level. South of the main house were Kembo and its separate tent platform, and the a garage building full of the caretakers’ equipment which the non-existent boys put to good use. On the beach side  was the boat house and the boat dock including a couple of power boats for water skiing. Kids also had a sailboat for windy days, a couple of rowboats, a kayak, and four Peterborough wood and canvas canoes.  Kids got comprehensive instruction in canoeing and went for overnight camping trips.

Two other things always intrigued me: a Model T chassis with working gears and the Gibsons’ old horse sleigh for winter transport.

The barn was at the south end with a corral 200 metres west in the camp orchards. (The camp was also a working full production orchard: 14 acres of apples, peaches, apricots, and cherries.) The barn was home to eight horses, and the scene of immense crying when each camp session ended, so attached did campers become attached to the horses. 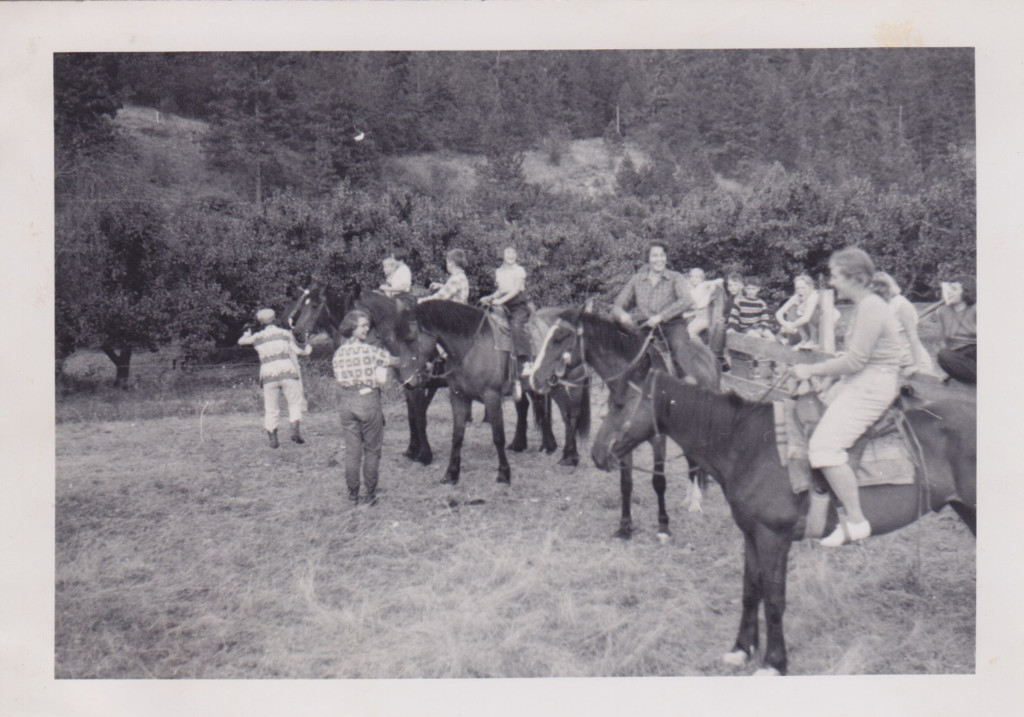 Kopje had a comprehensive riding program with the hills above providing campsites, trails, forests, grasslands, meadows, abandoned cabins. (In the 50s/60s the Okanagan was thinly populated; the Alberta invasion occurring only after the Rogers Pass highway was completed.) The riding provided me the only time I’ve been knocked unconscious. One moment I was cantering through an alpine meadow, then I remember a dream, next my eyes opened and I saw the counsellor and the girls looking at me. After checking me out I was pronounced fit to return to camp with the other boy. No concussion protocols then. Just get up and get on.”

This article will be presented in three parts on this blog. This is part two.