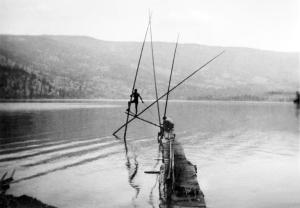 Charlie and Harold Thomson constructed a diving tower in front of the family home on the shore of Kalamalka Lake in the summer of 1933. As can be seen from the photograph of the tower under construction, it was made of poles and boards lashed and nailed together. The first platform was at the three-meter level and the high diving platform was approximately seven meters above the water. Malcolm “Mac” Dewar remembers as a young lad standing on the upper platform for a long time before summoning the courage to jump.

The second photograph shows the completed diving tower with a fully clothed Charlie surveying his handiwork.