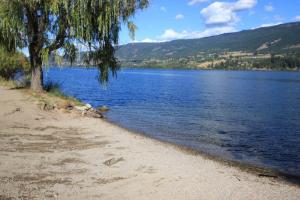 A little known, but authentic Indian word for Wood Lake, could be attached to a scenic section of Highway 97 when it comes under control of the District of Lake Country.

Pelewash Parkway has drawn the most votes in an online [straw] poll asking people to indicate their favoured new name for the road.

It was preferred by 40 per cent of the 372 people who voted on the town’s website, with Wood Lake Parkway drawing 33 per cent support, and Lake Country Parkway getting 26 per cent.

Town council will decide Tuesday [November 20, 2012] which name will be applied to the road when it becomes a municipal responsibility after a new Highway 97 bypass opens next summer.

“I think choosing Pelmewash would be a fitting way of acknowledging the history of the area,” Thomson, who first suggested the name, said Friday. “It’s authentic and also distinctive.”

Pelmewash is an Anglicized rendering of the word for the area used by its first inhabitants, Thomson says. It appears in a book published in 1958 chronicling the history of the Winfield area.

“Basically, it was an inexperienced European ear listening to what the Indians were saying, and trying to write it down,” he said.

If council on Tuesday chooses Pelmewash as the road’s name, Thomson suggests more research be done in co-operation with First Nations language experts to come up with a closer approximation of the word’s original pronunciation.