When and why did BC make the decision to drive on the right side of the road in Left Hand Drive (LHD) vehicles? 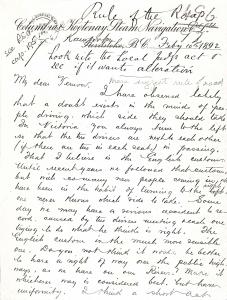 John A. Mara, MP for the Yale riding from 1887 to 1896 first suggested that BC adopt a Rule of the Road in 1892. In a letter to Forbes George Vernon (see attached document), Mara suggested that BC adopt either the English custom of driving on the left or the increasingly popular travel on the right . Well before the arrival of automobiles he warned of the confusion that existed that could lead to unnecessary accidents. (Click on documents to enlarge.)

It took twenty-eight years for the provincial government to act on Mara’s recommendation. 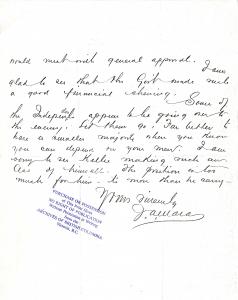 In the meantime there was no consistency in BC. Automobiles drove on either side of the road and parked on either side of the street.  On Vancouver Island it was customary to drive on the left but in places like the Okanagan the driving experience appears to have been more chaotic. LHD vehicles, likely made in the USA, co-existed with Right Hand Drive (RHD) vehicles, presumably imported from Great Britain.

On July 15, 1920 legislation made it mandatory to drive on the right in most of the mainland of BC, including the Okanagan and in 1921 this act was applied to Vancouver Island and the BC Electric Right of Way in the Lower Mainland.

Public notices were posted in newspapers and in public buildings announcing the changes. Henceforth folks in BC drove on the right, primarily in left hand drive vehicles.

It took some time for the public to adjust to this new regulation. Vernon erected four-sided pillars at main intersections with “Keep Right” signs painted on all four sides. These “Silent Policemen” reminded motorist to turn right to merge with oncoming traffic at intersections. Those of us who have driven in jurisdictions requiring driving on the left will appreciate that it is at intersections that one needs to be reminded of this Rule of the Road so as not to turn into oncoming traffic.

For an interesting video on “Right Hand Drive” check out the Royal British Columbia Museum’s blog of January 5, 2013.

The Department of Public Works Rule of the Road public announcement was published in The Vernon News, July 8, 1920 and was made available courtesy of Ken Ellison of the Greater Vernon Museum and Archives.