In the nineteenth and early twentieth century Canada it was common for children to live with their parents until age fourteen and then to live with an employer or surrogate parent where they could learn a trade or, at least, life experience.  Girls, except those from upper class homes, generally entered domestic service where they would learn skills that would serve them well in their roles as wives and mothers. Boys were sometimes apprenticed to a master tradesman or they began working in a retail store, a bank or a law firm where they learned the fundamentals of their chosen business or profession.  Those unable to obtain a position began a life of labour.

The accompanying letter (typescript below) to James Goldie from Nolan (?) Bulkeley refers to the behaviour of young Norman Bulkeley who has obviously been placed under the care of James Goldie of the Rainbow Ranch near Okanagan Centre. This letter is intended to remind Jim Goldie of his parental responsibilities. The boy is not on a vacation but is undergoing proper educational and moral training. It is obvious from the tone of the letter that Nolin Bulkeley will not hesitate to withdraw his son from Goldie’s care if Norman is allowed too much freedom. 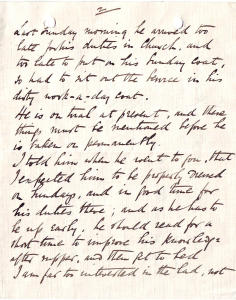 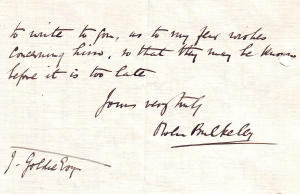 I strongly object to Norman being allowed to go out at nights after supper.  I hear he rode up to the Gales [?] the other night, and stayed there until half past nine.  He knows perfectly well that he would not have been permitted to do so, had he been here.

He is only a boy, and it is too early to let him have a man’s liberty.  Of course in the long evenings, boating and fishing, and other amusements nearby are all right; but to take a horse and ride miles away is for a man not a lad.

Last Sunday morning he arrived too late for his duties in Church, and too late to put on his Sunday coat, so had to sit out the service in his dirty work-a-day coat.

He is on trial at present, and these things must be mentioned before he is taken on permanently.  I told him when he went to you that I expected him to be properly dressed on Sundays, and in good time for his duties there; and as he has to be up early, he should read for a short time to improve his knowledge after supper and then get to bed.

I am far too interested in the lad not to write to you, as to my few wishes concerning him, so that they may be known before it is too late.

The letter comes from the Rainbow Ranch collection but is not well documented and is not accompanied by an envelope. It was written in March, 1910 and it is unclear whether Okanagan Centre is an inside address or return address. Mr. Bulkeley appears to have intimate knowledge of his son’s daily activities so he may be living nearby.  However, the names Nolan or Norman Bulkeley do not appear in the 1911 Canada Census, any vital statistic kept in BC, or on any property owners  or voters list.  The Bulkeleys are a puzzle. The destination of Norman’s evening ride is also unclear. Did he ride to the Gales?  The upper case letter appears to be a “G” similar to the one “Goldie” in the salutation. No Gales appear in any census, or list of owners of properties in the 1910 era.

NB: Thank you to Museum volunteer Elaine Pybus for bringing this interesting piece of history to our attention.