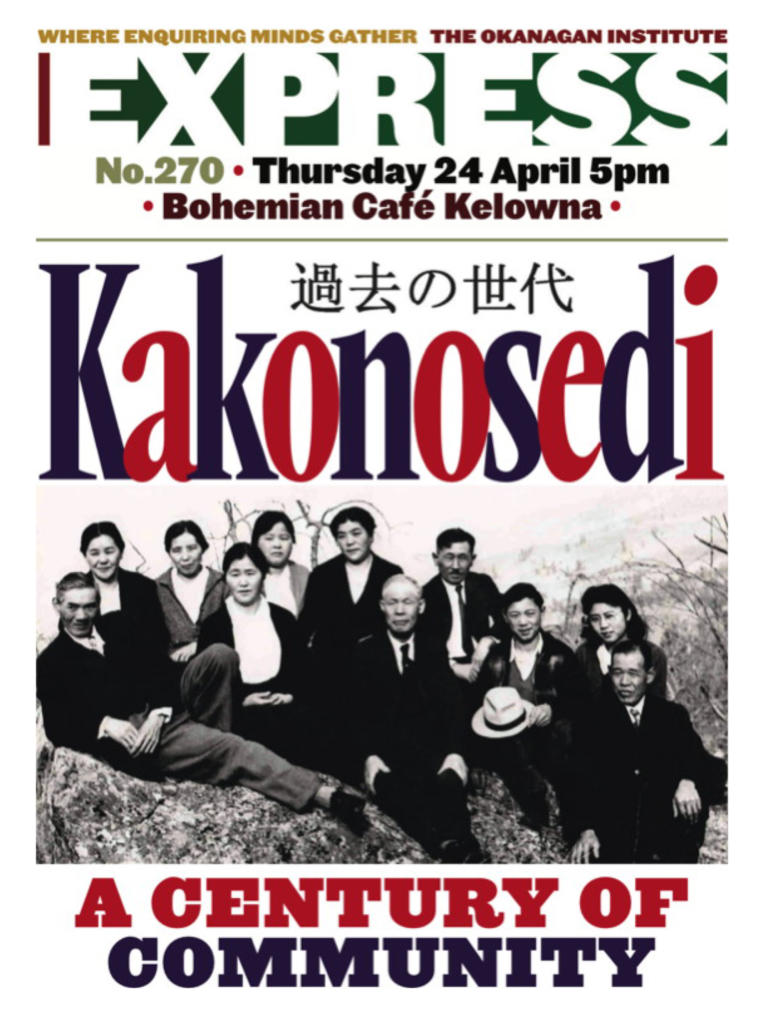 » $2 at the door. Refreshments are available.
» Space is limited, please reserve your seat HERE

On Thursday, April 24th at 5 pm the ongoing Okanagan Institute Express series at the Bohemian Café, 524 Bernard Avenue, Kelowna presents Kakonosedai: A Century of Community. Join us as a distinguished scholar and members of the Okanagan Japanese community celebrate 100 years of settlement, courage and determination.

The Japanese Canadian community in the Okanagan was established in the early 1900s, as workers came to plant new orchards. These pioneers, often from other areas of British Columbia, were young single men intending to work for a few years and then return to Japan. They brought with them many skills and a strong work ethic, and they contributed a great deal to the success of the early orchards. In 1907 alone, Canada welcomed 11,529 settlers from Japan. Some of them moved to the southern interior, working at the Coldstream Ranch and eventually moving to the District of Lake Country. Many of these early pioneers stayed, building a life in the community.

Prior to WWII, 22,000 Japanese Canadians lived in British Columbia; three quarters of them were naturalized citizens or second or third generation Canadians. During the war, more than 21,000 of them living within 100 miles of the British Columbia coast were forcibly removed from their homes and sent to internment camps. After the war, 3,964 were deported to Japan. One third of them were Canadian citizens. Thirty years later, in 1997, on behalf of Japanese Canadians, the Canadian government created a national organization designed to foster racial harmony and help to eliminate racism.

The Lake Country Museum & Archives has documented that history with the book Kakonosedai: A Century of Community. It portrays their arrival, experiences, hardships and the quiet dignity and perseverance with which they met the challenges of a new land. Their stories are told by their children and grandchildren, and supplemented by the collections of the Museum.

This event celebrates the stories and the publication of the book – which will be for sale at the event for $15 – and welcomes the following speakers:

Duane Thomson, Ph.D., is a Professor Emeritus of History, UBCO, specializing in Canadian, British Columbia, and Native history. Dr. Thomson has considerable experience in writing, editing, publishing and consulting, and was the Human History Consultant and contributor for the Living Landscapes: Thompson-Okanagan region website. Dr. Thomson is the President of the Lake Country Heritage and Cultural Society and the Lake Country Museum and Archives.

Addie Maehara has retired from teaching, and is a Director of the Lake Country Heritage and Cultural Society. Addie is the granddaughter of Winfield pioneers Fumi and Eijiro Koyama and has worked extensively with the Lake Country Museum in assembling the history of the Japanese Canadian pioneers of Lake Country and their experiences from 1889 through 1939.

Susumu ‘Sus’ Taiji is a lifetime resident of Lake Country, whose parents, Toyokichi and Oei (Takenaka) Taiji were two of the first pioneers of the community. Throughout his life, Sus has been very community minded, and served on many volunteer organizations including the Winfield Fire Department as a firefighter and Chief. Sus is pictured on the book’s cover photo of the Aobakai Club in the 1930s.

Shannon Jorgenson is the Manager of the Lake Country Museum & Archives, with a background in Political Science and Education. “Researching and recording the history of the Japanese Canadian pioneers of Lake Country has been a multi-year project for the Museum, of historical significance, and a story that has not been generally known outside of Lake Country.”

Kakonosedai: A Century of Community takes place at the Bohemian Cafe, 524 Bernard Avenue, Kelowna. This marks the 270th event the Okanagan Institute has held since the Express series got underway in 2007.