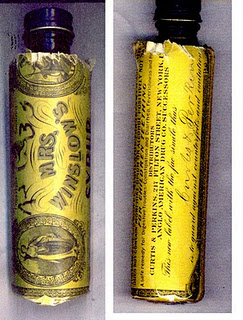 This small bottle contains 1.5 fluid ounces of syrup that contains senna, sodium citrate, fennel, sodium bicarbonate, rhubarb, oil of anise, glycerin, and sugar. We’ve seen these ingredients in other medications for gastrointestinal disorders. This one says that it’s a stomach and bowel regulator for infants and children and states in large letters that it DOES NOT contain morphine, opium or alcohol. POSITIVELY NOT NARCOTIC. This is an improvement over the practice of giving teething or otherwise fussing children a dose of laudanum. The bottle has a curious label. It’s a paper cylinder, open at the cap end and folded over and glued at the bottom. Also on the label are two fancy medallion-type illustrations. One looks like Justitia, The Roman Goddess of Justice. She is carrying a sword and a set of scales but she is holding them over her head and she’s not blindfolded as so many Lady Justice representations are. The other ‘deity’ looks like she might be holding a spindle and working with thread although the worn edges of the label make it hard to be sure. It doesn’t look like any of the representations of goddesses of fibre arts that I found but it might be a better fit for this medication that the Justitia. A spindle is also called a distaff in German and distaff refers to the female side of a family. Women usually look after children so distaff might make sense. Is that a stretch?

Anyway, this label makes a big deal of copyright and making sure that this product is genuine.  It says that the distributors are Curtis & Perkins of 217 Fulton Street, New York U.S.A.  Anglo American Drug Co. Successors.  It goes on to state:

This new label with the facsimile thus:

to guard against counterfeits and imitations.
It further states that this has been entered according to Act of Congress A.D. 1852 by Curtis & Perkins in the clerk’s office in the District Court of…(unreadable)

At least this baby’s medicine has a legal seal of approval.