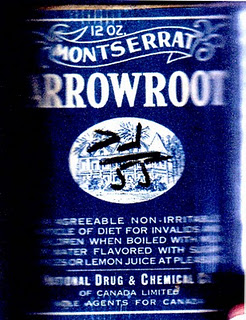 I have always liked arrowroot biscuits but I didn’t realize the history behind them until I started researching the museum’s can of Montserrat’s Arrowroot.  Arrowroot has a long history of cultivation in the Caribbean as a food staple. Arrowroot thickens at a lower temperature than does flour or cornstarch is not weakened by acidic ingredients, has a more neutral taste, and is not affected by freezing.  In the Victorian era it was used, boiled with a little flavoring added, as an easily digestible food for children and people with dietary restrictions but it was popular in Britain before that.  Napoleon said that the Brits used it only to support their Caribbean colonies.
Our can of Arrowroot was distributed by the National Drug and Chemical Co. of Canada Limited  (Montreal).  By the turn of the century, drug manufacturing in Canada was becoming established with more effective medications on the market replacing some previously doubtful concoctions. By 1910, the National Drug and Chemical Company of Canada was the leading manufacturer of both prescription and nonprescription drugs in Canada.
On the back of our Arrowroot can, Montserrat Lime-Fruit Juice and Cordial is advertised, manufactured by the same company and sold by “Druggists, Grocers and Department Stores.”  According to the text on the can, both arrowroot and lime juice were grown on the Caribbean island of Montserrat, an island that was discovered by Christopher Columbus in 1493 or, according to our can, 1498.
Montserrat is apparently a paradise but even paradise has its problems. First, the Spanish claimed it. Then the British ‘acquired’ it in 1632 and it was settled by Irish refugees fleeing prosecution for their religion becoming known as the Emerald Isle of the Caribbean.  During the American Revolutionary War, it was captured by France and then returned to Britain as part of the treaty of Paris. From 1871 to 1958 Montserrat was administered as part of the Federal Colony of the Leeward Islands, becoming a province of the short-lived West Indies Federation from 1958 to 1962. In 1979, producer George Martin’s AIR Studios, Montserrat opened and the island attracted world-famous musicians who came to record in the peace and quiet and lush tropical surroundings of Montserrat.  In 1989, Hurricane Hugo destroyed 90% of the structures on Montserrat and the island was recovering when, in 1997, a long dormant volcano erupted and destroyed the capitol and major port.  The inhabitable part of the island is still lush and beautiful but its main industry is exporting aggregate.  Imports include practically everything that is for sale on the island and its operating budget is obtained primary from Britain—about £25 million per year.
But back to Arrowroot.  There are recipes on the Internet for the use of Arrowroot, including arrowroot biscuits.  I learned that arrowroot is used for making sensitized paper used in photography for positive prints. It is plain or non-glossy, and is coated with a weak solution of arrowroot in water, with sodium, chloride, and a trace of citric acid.  And while researching papermaking, I discovered a completely unrelated fact:

In 1844, both Canadian inventor Charles Fenerty and German inventor F.G. Keller had invented the machine and process for pulping wood for the use in papermaking.