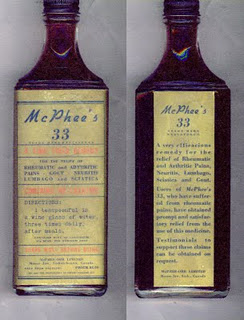 Looking this medication up was yet another adventure.  “McPhee’s 33″ led me to Katharine McPhee’s wallpaper site where you can download 33 different poses of the singer/songwriter.  I also found Adam McPhee, an Australian footballer whose player number is 33.  I tried “McPhee-Orr Limited”, the company that marketed this product and got Bobby Orr.  Moose Jaw Saskatchewan, also listed on the bottle, turned up nothing—not even any heritage buildings.  Well, I did find a couple of McDonalds listed in the Moose Jaw businesses.
Finally, I just started looking at ingredients.  McPhee’s 33 says it is for the relief of RHEUMATIC and ARTHRITIC PAINS – GOUT – NEURITIS, LUMBAGO and SCIATICA.  The print in red says 1.  A Time Tried Remedy; 2. Contains no Laxative; 3. Shake well before using.  It also says that the trademark is registered and that there is a proprietary medicine patent.
In small print, it says the medication contains 9 ¾ mins. of wine of colchicum per maximum dose. The directions say to take 1 teaspoon in a wine glass of water three times daily, after meals.
Colchicum  is a genus of flowering plants containing around sixty species of perennial plants which grow from corms. It is a member of family Colchicaceae, and is native to West Asia and part of the Mediterranean coast.
Colchicum autumnale, commonly called “autumn crocus” or “naked ladies”, is the best known species.
I found out that colchicum is actually dissolved in wine because it does not dissolve well in water and that either the corm or the seed can be used although the seed keeps better than the corm. It has been used for gout, gouty rheumatism and neuralgia but also to reduce edema and it is more effective in solution with sulphate of morphine or magnesia or magnesium sulfate.
Overdoses are serious with all sorts of nasty effects and it can be lethal.
From Wikipedia: Its leaves, corm and seeds are poisonous, containing the alkaloid colchicine. Its roots and seeds have long been considered to have valuable medicinal properties deriving from the use of small doses of this drug, such as to treat gout. Murderess Catherine Wilson is thought to have used it to poison a number of victims in the 19th century.  Nasty woman.  It sounds like a very unpleasant way to die.