Moving quietly and slowly, inching forward with neck arched, feet slowly raised then
placed, and dagger-like beak poised, a Great Blue Heron stalks its prey. Then comes a lunge,
a stab – and the fish, frog or cicada is toast. While Great Blue Herons are not common in
winter in most parts of Canada, in our valley and coastal BC you can often see them during
the colder months, the large distinctive shape easy to spot.
Standing between 3 and 4.5 feet/~0.9 to 1.3 m, they are big birds, grey and obvious. The
outer edges of their large wings are edged in darker feathers, visible underneath when they
fly. (Young birds are browner overall and have dark tails.) A Great Blue Heron flies
majestically and their flight can easily be confused with that of eagles. Since the wingspan is
about the same size as that of an eagle, this isn’t surprising. The wingbeats are slow and
floppy. The bird holds its neck folded back to reduce drag, and the feet and legs trail out
behind. People sometimes erroneously call these birds ‘cranes’ but although cranes are the
same size they are not here at all in winter and their habits are quite different.
Often herons perch on the unoccupied nests of Osprey, or roost in large trees, from where
they can survey the potential for hunting below them (or simply snooze in safety!) They are
abundant across the entire country close to the 49 th parallel; some migrate southwards
when the weather is colder in search of open water. 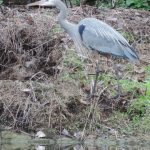 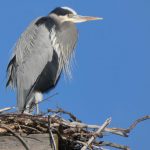 Great Blue Herons are never far from water. You will often see them in marshes or swamps,
in coastal tidal mudflats, along the edges of ponds or lakes, even when the water is mainly
frozen, or stalking prey in wet fields. They nest communally in large heronries. In Kelowna
you can see a large heronry between Benvoulin Road and the west side of the Mission
Creek Greenway and there is another large colony in the north end of Vernon. The
droppings eventually kill off their host trees and the birds are forced to find somewhere
else. 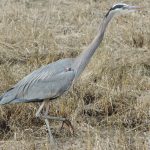 The nest of each pair, made of twigs and branches, often seems flimsy as a cradle for the
eggs and growing young. Typically they lay between 2 and 4 eggs, and sometimes raise two
broods a year. In winter the nests are easy to spot in the bare trees. The birds begin nest
repair early in the year and sometimes breed as early as February. In breeding plumage the
Great Blue Heron has shaggy plumes of delicate feathers, often with a bluish coloration,
cascading down its neck and over its back. The plume of feathers at the back of the bird’s
head is black.
Like many large birds, Great Blue Herons live a long time, as much as 20 years. If you keep
your eyes open, you will find that they often return to the same field where they have been
successful hunting. A good place to look is the wet fields in the valley bottom along Bottom
Wood Lake Road, or lower Lodge Road in Winfield. When you find one, take a little time to
watch it hunt if you can. The flurry of sudden activity is dramatic.

Above: Great Blue Heron at Rotary Marsh, Kelowna, in mid-winter
NOTE: all the above birds are in breeding plumage.