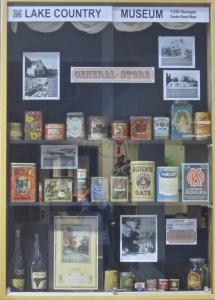 The new display at the District of Lake Country office pays tribute to the past General Stores of the area with an assortment of tins, canisters, and glassware. The containers are from the museum’s large store collection. Kelowna Pride Tobacco, Ogilvie Oats, OK Evaporated Apples, and Bulman’s Cabbage Flakes were produced locally. Lake Country had numerous General Stores including Gleed’s, Red and White, Strickland’s (all in Okanagan Centre) Winfield, Hillside, Woodsdale, (in Winfield), and Smith’s (in Oyama).

Once again, Museum volunteers Karen and Glen Gibbons have assembled an amazing array of artifacts to give the public an opportunity to peek into the past of their community. Click on the photographs to enlarge them and take a closer look at these interesting artifacts. 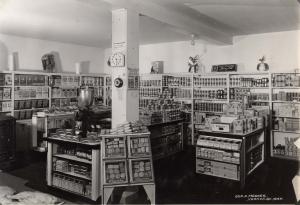 The Lake Country Museum has documents and photographs in their archives which also document this part of Lake Country’s history. For instance, the photograph to the left (donated to the Museum by Oyama resident Harley Smith) shows the orderly interior of the Smith General Store in Oyama.

Below, Richard Gibbons, Board member of the Okanagan Heritage and Cultural Society has written an interesting history of the Winfield General Store.

Les Clement’s store on Highway 97 was the shopping hub of Winfield and its population of perhaps five hundred or so.  Ernest and Margaret (Whelan) Clement and son Les purchased the store, which had been started by Ernie Lawley, in 1934. They took possession in January 1935, with Les and his dad as partners. Ernest Clement died suddenly in October 1947, and Les then became the sole owner, operating the store as a general merchandiser until 1957.

Groceries, meats and produce as well as every type of staple could be purchased at the store. School supplies, paint, a new pair of gum boots, a fishing license and lures, toys, comic books, confections and ice cream treats are just some of items carried at the store. The staff at the store were local people and include George King, Dorothy Dehnke, Helen Hein, Pearl Coller, Mona Holitzki, Connie King, Wilma Clement, and Eunice McDonagh as well as others. Most local residents were allowed to keep an account there. The cash register receipt was added to the family account which was paid, without interest, on payday or whenever.

From the late 1940s, Les also operated the Post Office and added space in 1952 to permit full postal service with Art Arnold as the rural carrier. Les continued to be the Postmaster until his retirement in 1974. The store was also the initial location of the Okanagan Regional Library under the watchful eye of Mrs. Kennerly. Les sold the business in 1957 to Ernie Oxingham. The Winfield General Store was located just south of the Winfield Motel.

Richard Gibbons’ article is taken from the Lake Country Museum’s publication Spirit of Lake Country. Heritage and Culture which may be purchased at the Museum.