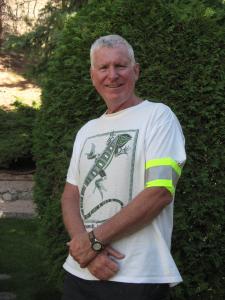 By the numbers, most Lake Country residents have a reflective band to enhance their safety when walking at night. But the everyday reality appears to be that not many people, particularly the youngsters for whom the visibility heightening program was conceived, actually do wear the arm bands.

“It’s a bit of a sad commentary, unfortunately.” said Rich Gibbons of the Lake Country Rotary Club [and director of the Museum]. “We can provide lots of these arm bands, but ultimately it comes down to people choosing to be responsible for their own safety and wearing them.”

This year the Rotarians have distributed about 6,000 of the yellow and orange arm bands. They’ve been given away at all local schools, seniors complexes, the community centre, shopping areas, anywhere people gather.

Two years ago, in a similar program, the Rotarians distributed about 1,000 of the bands. Lake Country has a population of about 11,500.

The project was sparked by the death of a hgh school student in January 2010, who was hit by a car as she walked at night along Bottom Wood Lake Road.

At their Tuesday night meeting, Lake Country councillors agreed to support continued free distribution of the arm band by giving the Rotarians a grant of $3,700. The bands cost about $1.25 apiece.

“It’s a very worthwhile projec,” Mayor James Baker said. “The reality is, we’re a semi-rural area and there aren’t that many places along the roads where there are sidewalks.”

Once classes resume after Labour Day, hopes are teachers and the RCMP school liaison constable will remind kids of the importance of walking facing traffic, and to always wear brightly coloured clothes at night.

“If this project saves just one life, preventing someone from being hit by a car, it will have been well worth the cost,” Gibbons said.